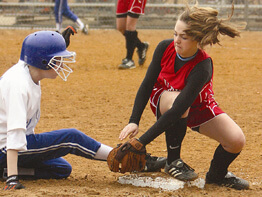 If the first two regular season games are any indication, the Archbishop Spalding High School, Severn, softball team is looking good for a three-peat in 2007.

With 5-1 and 5-0 wins over St. Vincent Pallotti, Laurel, and Mount de Sales Academy, Catonsville, the team returns a majority of its starting line-up. The real shift comes in a changing of the guard as skipper of the team. Paul O’Brien, who successfully coached the St. Vincent Pallotti, Laurel, team for seven seasons, took the reigns just two weeks before the start of the season.

The Cavs (2-0) are led by senior Stephanie Weigman, the team’s top-notch pitcher. Her strength, competitive spirit and love for the game make Weigman untouchable at times. In their league opener, a 5-1 win over Pallotti, Weigman notched 13 strikeouts.

But behind the speed of Weigman’s arm are players who are ready, willing and able to contribute to the team’s success. In fact, the Lady Cavs get significant results from every player on the team. With four seniors and only three sophomores on the roster, the Cavs are steeped in experience and full of confidence.

Leading off for the Cavs again this season is senior Sloane Van Meter, a speedy slap hitter who, more often than not, puts the ball in play. Van Meter is followed by first baseman, junior Andrea Catucci who makes way for the middle of the line-up with junior Meghan Van Meter, senior Nicole Reeder, Weigman and senior Marybeth Herrick. The line-up is rounded out with sophomore Elaine Nescio and juniors Casey O’Neill and Delaney Bell.

“I love this game. There is so much strategy required,” said O’Brien, a softball enthusiast.
The team will prepare for the Annual Cavalier Classic that takes place on April 7 as well as the stiff competition ahead of them in the Interscholastic Athletic Association of Maryland’s A Conference. Hot on the heels of the Cavs are the Institute of Notre Dame, Baltimore; The Seton Keough High School, Baltimore; and The John Carroll School, Bel Air.