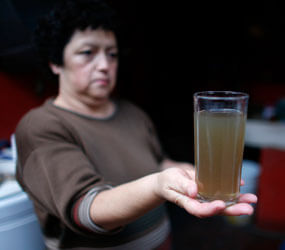 WASHINGTON – As the world’s population grows and the amount and sources of potable water shrink, the number of conflicts over water access and usage is likely to increase, said members of a panel on water rights that convened Jan. 6 in Washington.

But the opportunities to resolve those conflicts peacefully and sustainably can likewise grow, the panelists said.

“You can’t be looking at development without looking at some of the structural issues,” said Jason Gehrig, a CRS consultant who is the publication’s main author. He and his wife spent 2000-2007 as Maryknoll lay missioners in Bolivia. Increasing water scarcity, Gehrig said, is “likely to be a catalyst for increasing violence on the local level.”

Gehrig said he worked on water privatization issues in two Bolivian towns. In one, El Alto, “the water service had been privatized and after eight years the people had had enough,” he said, paying “the equivalent of nine months’ worth of income for water and sewer connections.”

“Tap into Catholic social teaching that’s out there,” Gehrig recommended. “There’s some heartening movements on the international level,” he said, such as “the right to safe water as a human right.”

CRS director Ken Hackett said he once worked for the Peace Corps digging wells in Ghana. “Where to put the wells is a passionate item – especially for the women who have to fetch the water,” he said.

“We have to apply better knowledge and more analysis to identify emerging disagreements,” Hackett added, since “water conflicts have the potential to burgeon into something much bigger.”

“Approximately 1 billion people lack access to clean water, and more than twice that many do not have adequate sanitation,” Hackett said in a letter to CRS supporters released Jan. 5. “As a result, more than 2 million people, mostly children, die each year from diseases related to dirty water and poor sanitation.”

William Hall, an adjunct professor in the conflict resolution studies program at Georgetown University in Washington, served with the Peace Corps, too, in Zaire (now Congo). “I remember well the women and children walking up tall hills to get water. And me capturing water from the roof with a 55-gallon drum and using it for bathing water,” he said at the symposium.

Hall suggested using environmental conflict resolution to mediate among parties before a crisis erupts into something bigger and harder to contain, adding that it has shown success in 61 percent to 91 percent of the disputes where it has been applied – not only for water but other environmental issues as well.

“Some sort of ECR is possible if we’ve gotten to the place where power is reasonably balanced” among disputants, Hall said, adding, “It’s extremely important to say what goal we’re working toward.”

One component to making environmental conflict resolution work is “making sure the appropriate parties are involved,” Hall said. “Make sure you have everyone in the room” and furnish “high-quality and relevant information,” he added. “If they have relevant information, they’re better able to meet their goals.”

“Where conflict is most severe, the governance is the weakest,” Walker said, adding that solutions may have to depend on local rather than federal enforcement.

Gehrig said, “Any of us who have worked in the field know that anything water-related is going to lead to conflict.”

Hall noted that water disputes are no longer exclusive to other lands, citing some hydroelectric power tussles in Oregon. In one domestic water-rights case using environmental conflict resolution, Hall said, “we costed out the fish.”