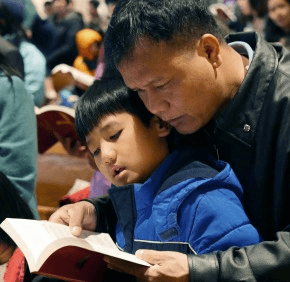 A father and son sing together during Mass Mar. 1 at Our Lady of Victory in Arbutus. (Karen Osborne | CR Staff)|
By Paul McMullen
pmcmullen@CatholicReview.org
Twitter: @ReviewMcMullen
ARBUTUS – “We don’t have to be afraid. God has prepared a place for us.”
Father Timothy Klunk, pastor of Our Lady of Victory Parish, was speaking of heaven, but the message had earthly significance for many attending the 10:30 a.m. Mass March 1.
When local immigrants from a southeast Asian nation want to dine out on their homeland’s cuisine, they head to Burma Road in Gaithersburg or Mandalay Restaurant and Café in Silver Spring. When the state’s Burmese Catholics worship, however, it is most likely at Our Lady of Victory (OLV).
“The Burmese people bring a great vitality to the parish,” Father Klunk said. “My goal is to integrate the community into the parish.”
To view a slideshow, navigate the arrows below. He first noted them in 2009, when the federal government began settling Burmese refugees in Baltimore.
The apartments across Wilkens Avenue, off Alan Road, are teeming with Burmese newcomers. The community includes Mary Suilian, who said there are 75 adults and 44 children living in OLV Parish, nearly half the Burmese Catholic community in Maryland.
A nation of 51 million, Burma borders China and India, among others. Its most famous citizen is Aung San Suu Kyi, now free a political prisoner for nearly two decades. Approximately 5 percent of the population in the heavily-Buddhist nation is Christian.
Burmese Catholics have fled instability, persecution and a 2009 cyclone that left 85,000 dead. Those in Baltimore are primarily from Chin state, in the western part of what is formally called the Republic of the Union of Myanmar. Many entered the U.S. after first establishing residence in Malaysia.
Emily Hmung lives in Gaithersburg but was at OLV on the second Sunday of Lent “because our Burmese people are here.”
She came to the U.S. in 1997, four years after the death of her husband, an Army officer who she said endured persecution for converting to Catholicism. Her son, Maurice Lee, said they had to get a permit to sing Christmas carols in Burma, and not just because they were Catholic: “You weren’t allowed to gather more than five people in one place.”
Here, mother, son and other Burmese Catholics gathered around a table in the OLV narthex to share their stories. They included Anthony Aung, an OLV parishioner who met his wife, Roi Ja Lahpai, through Hmung, and Peter Hlan Za Uk, the catechist who was assigned here in 2013 by Bishop Felix of Kalay Diocese in Burma.
Addressed as “Saya,” a term of respect in Burma, Peter Hlan Za Uk has little English but a Toyota Sienna that takes him from Harrisburg, Pa., to Montgomery County, assisting the spiritual needs of Burmese Catholics.
“Ninety-five percent of the (Burma) Catholics here are refugees,” Aung said. “Because of political reasons, we left the motherland in search of a better place. As we came here, our problems were pretty large; we need people like him.”
Aung pointed to Father Klunk, who, after welcoming people to Mass, adds the Burmese greeting “mingo la bah.”
“Father Tim is the best person for us,” he said. “Because of him, we can grow the community. Every time we ask for something, he finds a way.”

A man from the Burmese community at Our Lady of Victory in Arbutus prays before a Mar. 1 Mass.
(Karen Osborne | CR Staff)

Father Klunk pointed to Bill Blome, who teaches English as a second language twice a week in OLV’s Marian Room, and Gloria Smith, the director of religious education, who works to integrate the newcomers. There are no Burmese children enrolled in the parish school, according to Father Klunk, but several are preparing for their first Communion and other sacraments.
He has celebrated two weddings among Burmese immigrants.
Then there are the Knights of Columbus, Our Lady of Victory Council #16104. The council chartered in December, with 17 of the 36 members being immigrants from Burma.
The Maryland State Council helped establish the OLV Council, which brought Thom Partenope, the state’s membership chairman, and Richard N. Boehm, community activities director for the state council, to OLV March 1.
“It’s our baby,” Partenope said, “a great way to bring the Burmese people into the community.”
Burmese Catholics seemed unaffected by the proverbial wintry mix of precipitation that had limited Mass attendance throughout the area. Driving 40 miles through snow and sleet didn’t seem daunting to those who had traveled halfway around the world to find freedom.
Also see:
Cardinal Egan, retired archbishop of New York, dies at 82
Possible saint has ties to Baltimore
Rite of a election a time for bringing families closer
PrevNext