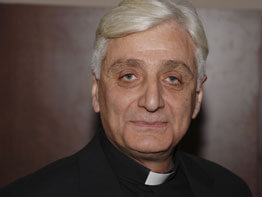 LONDON – The war in Iraq might have caused the end of Christianity in the country, said a Chaldean Catholic bishop.

Bishop Antoine Audo of Aleppo, Syria, said that the hundreds of thousands of Christians who had fled their homes in the aftermath of the 2003 U.S.-led invasion were still too scared to go home.

He told Catholic News Service in a Nov. 28 interview in London’s Church of the Immaculate Conception that unless security improved in Iraq the Chaldean diaspora may become permanent.

“They love their country, but at the same time it is impossible for them to go back to this situation,” said Bishop Audo, who ministers to approximately 60,000 Iraqi Christian refugees in Syria.

During a Nov. 29 press conference, Bishop Audo said that prostitution among desperately poor Iraqi Chaldean female refugees had emerged as a “serious problem” for the church in Syria.

The bishop visited London Nov. 28-29 as a guest of Iraqi Christians in Need, a British-based group set up this year to provide displaced or persecuted Christians with money for food, medicine and an education.

The bishop told CNS that the war was a tragedy for the 1.2 million Christians who lived in the country at the time. More than half of those Christians have since fled.

“It may be the end of Christianity in Iraq,” he said. “This is very sad and very dangerous for the church, for Iraq and even for Muslim people, because it means the end of an old experience of living together.

“If in the Middle East Christians and Muslims are not able to live together, then it will also be very dangerous for the West in the future,” he said. “We have to save this coexistence, this nice experience of history, in spite of all the difficulties which we have.”

The bishop’s comments came as the Iraqi government said that refugees slowly were beginning to return to the homeland after a decline in sectarian violence. The reverse flow has followed a recent surge in U.S. and Iraqi military operations against terrorists and militia groups.

The government has offered free transportation and is offering to pay $800 for every family willing to return. Some 4,700 families have heeded the call, and another 8,500 are on a waiting list.

Of the 4 million Iraqi refugees, about 1.4 million are in Syria and 750,000 are in Jordan. Two million are displaced within Iraq. In Syria, 44 percent of Iraqi refugees are Christian, according to the U.N. High Commissioner for Refugees.

“They have no legal protection by law and they are not recognized as refugees,” he said. “They feel that they can’t go home because of the war, and at the same time they can’t get a (work) visa.”

“They have to work on the black market and they are exploited by the Syrians,” he added. “They pay huge amounts of money to hire (rent) apartments, and they are suffering from severe poverty.”

The bishop said many of the refugees had lost family members, as well as their homes and jobs, because of the violence.

He said they found themselves in a foreign land without rights, security or hope. He said the psychological impact on the refugees has been devastating.

The Christians were being targeted partly by Muslims who identified them with Western military aggression, he told CNS.

He said Western governments should grant asylum to more Iraqi Christians and that Christians in the West should support them with money and with work in peace and reconciliation.