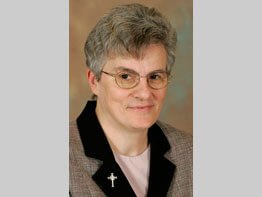 WASHINGTON – The slide in Wall Street stocks triggered by the federal takeover of mortgage banks and finance houses in September should not pose a problem for religious orders, including those with large numbers or percentages of retired members, according to the head of the National Religious Retirement Office.

“Most of the religious communities are invested for the long term. So depending on how long this market upheaval lasts, they can ride it out,” said Precious Blood Sister Janice Bader, the office’s director for the past year.

But, she added, “if they’re in a position where they have to draw down funds while the market is down, that’ll have an impact, that’s for sure.”

Sister Janice said, “Most of the communities have positioned their portfolios so that the money they’re going to be withdrawing for current use is in short-term investments, which are not going to be impacted as severely as long-term funds.”

In an interview with Catholic News Service, Sister Janice said the office has “some concern” the economic situation could “negatively impact the return on the collection,” but noted that even in past years, “when we thought it would be down,” donations didn’t go down significantly.

In fact, the first Retirement Fund for Religious Campaign collection was conducted in 1987, less than two months after the “Black Monday” dive in the New York Stock Exchange in which the Dow Jones industrial average dropped by 508 points to 1739, a plunge of 22.6 percent – second only to a 24.39 percent drop in 1914 after the stock market had been shut down for four months because of the outbreak of World War I.

But, regardless of stock prices in 1987, American Catholics responded so generously that the Retirement Fund for Religious collection instantly became the most successful national collection for the U.S. church – a title it holds to this day.

The funds contributed in the collection are invested through the USCCB, “so we don’t make the actual investment decisions,” Sister Janice said. “The USCCB serves as the custodian and it’s commingled with the other funds that are managed by the USCCB.”

And based on the calendar-year-2007 audit report received in August, the Retirement Fund for Religious monies “have been growing very nicely,” she added.