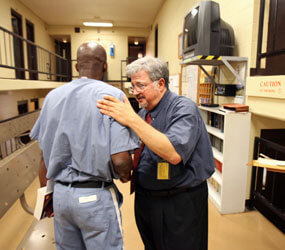 WASHINGTON – Dale Recinella played the financing game like a fiddle, even working through Christmas one year to secure the complex arrangements to finance a new stadium for football’s Miami Dolphins.

Yet he turned his back on the twin rushes of high pay and high power to minister to some of the most downtrodden: poor people with HIV and AIDS, and eventually prisoners on death row.

Recinella chronicled his journey in a new book, “Now I Walk on Death Row.” “The book is not so much about the death penalty than it is about seeking the answer to the question: Did Jesus mean what he said?” Recinella told Catholic News Service in a recent telephone interview from his job in northern Florida, where he works part time to support his wife and family.

One similarity to his high-flying corporate career: He’s got a window office. “And right outside are the garbage cans,” Recinella said with a laugh.

As a volunteer chaplain, he ministers on death row three days each week, all day Mondays at a death-row prison in the Sunshine State and part of the day Wednesdays and some Saturdays. He gives religious education instruction Wednesday nights at Union Correctional Institution near Raiford, Fla.

“Wednesday, everybody goes to church at night except the Catholics,” Recinella said. He teaches inmates about “living Gospel values authentically in our lives and in situations we encounter day in and day out. We have 110 inmates. … They change over every year. It is an extremely valuable program. Those (in the program) who are released have a much better chance of making it.”

Recinella, who has written the “Respect Life” column for the Florida Catholic string of diocesan newspapers for the past 11 years, is now an opponent of the death penalty but had long been unaware of the inconsistency in his position on life issues.

“Even as a teenager and a college student, I was very active in right-to-life, but I also strongly supported capital punishment,” he told CNS. “I had no clue that our bishops had already come out and asked us to stop using capital punishment, and I kind of stumbled into that awareness in the late 1980s and early ‘90s.

He added, “Reason dictates against this practice. So faith and reason come together.”

Recinella suggested life imprisonment without parole as an alternative to capital punishment. “What people do not realize is that, through politically motivated expansions of the death penalty, we have plenty of people (on death row) who never intended to kill anyone,” he said.

Recinella also stays on top of death penalty issues, including the Troy Davis case decided by the Supreme Court March 28, the day before the CNS interview. The high court rejected Davis’ final appeal for a chance to prove his innocence in the 1989 murder of a police officer in Savannah, Ga.

“One of the most startling issues in the Troy Davis case is the question of whether or not innocence matters in the American death penalty,” Recinella said. “And the tension is between the desire for closure on cases, and the danger of executing the innocent.”

Recinella reflected on the seemingly sudden change in his career path. “My lawyerly training trained me to fix things,” he said. “What I learned in this journey is that my wife and my children did not want to so much to be fixed; they wanted to know that I cared for them. And that means time. I came to think that time means money, and one of the things that God has shaken me out of is that time is a gift, and time is the most precious gift I can give.”

The family, children included, discusses and prays over career, income and lifestyle changes until everyone is on board. Recinella and his wife, Susan, even sponsored one man he had ministered to in prison when he was released on parole after serving 25 years for murder. The man, identified in the book only as “Kenny,” works as a sexton for a nondenominational ministry and is engaged to a woman he met since his release.

Recinella said his editor at Chosen Books, a Protestant publisher, asked him to write “Now I Walk on Death Row,” but informed him most of its readers were “primarily non-Catholic Christians. … I’d like you to bring them along with you, but in a way that they will be very comfortable going along with you.”

“If this had been a Catholic publisher, I certainly would have spent more time on the role of daily Mass in our life when were going through those changes, (and) about the role of eucharistic adoration in which we included our children,” Recinella said.

He has used the title “Now I Walk on Death Row” for talks he has given over the years about his prison ministry. It has led to confusion as to whether Recinella himself was – or is – a convict.

“A few years ago I was speaking at a ‘Theology on Tap’ on the death penalty for the Notre Dame Alumni Club in Orlando,” he said. “The posters were up and I went to the barkeep and I told him I was the fellow who was speaking, and he looked at me with absolute disdain and said, ‘I can’t believe they let somebody like you out to give talks.’ After we cleared it up, he was much warmer toward me.”