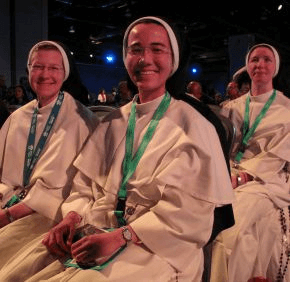 By Erik Zygmont
ezygmont@CatholicReview.org
Twitter @ReviewErik
As he celebrated both the closing of the Year of Consecrated Life and the World Day for Consecrated Life with a special Mass Jan. 30, Baltimore Archbishop William E. Lori noted in his homily the aptness of the first reading.

“Many of you have heard the calling to religious life early on in your lives,” the archbishop told the congregation at the Basilica of the National Shrine of the Assumption of the Blessed Virgin Mary in Baltimore that included dozens of religious sisters, brothers and priests who had professed the vows of chastity, poverty and obedience.

“I’m betting you can relate,” the archbishop continued, “to what the Lord said through the prophet Jeremiah: ‘Before I formed you in the womb I knew you; before you were born I dedicated you … ’ ”

The religious men and women present celebrated the temporal markers of their commitments, with special recognition for the jubilarians among them.

School Sister of Notre Dame Peggy Mattare looked back on 60 years of ministry that included teaching, medical research, work as a physician assistant and launching Shalom, the sisters’ international network for justice, peace and integrity of creation.

“Today, when young people join, they can sort of choose what they want to do,” Sister Peggy said, noting that working in education is no longer a primary requirement of her order. “But you know, I’m glad I did. Everything I was in after education involved teaching … It opens up a lot of things that help you in other professions.”

Sister Suzanne Delaney celebrated 50 years with the Sisters, Servants of the Immaculate Heart of Mary. As in secular life, religious life can be unpredictable and surprising, she noted.

“When I entered (the order), it was before Vatican II,” she said. “The changes that occurred were unexpected, and I had the opportunity to do a number of different types of ministry which I didn’t anticipate.”

Sister Suzanne first met the sisters of her order as a student at the former St. Bernardine Catholic School in West Baltimore.

“I was just attracted to the joy and the hospitality that they shared with all of us youngsters,” she said. “I guess that was when the seed was planted.”

Sister Suzanne said she would have been content ministering as a teacher – and did teach for the first 15 years of her ministry – but embraced new opportunities when they came. She came to Baltimore in 1981, working for the archdiocese under the late Sister of Notre Dame de Namur Rosalie Murphy, the first woman to lead a major division of the Catholic Center. Sister Suzanne later ministered at St. Mary’s Spiritual Center and Historic Site, also in Baltimore.

Her more recent ministries include working for the Leadership Conference of Women Religious for 14 years, and for the past eight years at Loyola University Maryland as an administrator of pastoral counseling at the Columbia campus.

Young people who go into religious life, Sister Suzanne said, “find a life focused on prayer and contemplation, which I think the world is hungering for.”

“They also get to work in many ministries that reach out to the poor and abandoned,” she added.

Sister Philomena Chizea, Sister Trinita Baeza and Sister Anthonia Ugwu, left to right, all Oblate Sisters of Providence, enter the Basilica of the National Shrine of the Assumption of the Blessed Virgin Mary through the Holy Door of the Year of Mercy. (Richard Lippenholz/Special to the Review)

School Sister of Notre Dame Eileen Epigg, also celebrating 50 years, enjoyed that part of her ministry the most. From 1980 to 1986, she ministered migrant farm workers in Immokalee, Fla.

“I was reaching the poorest of the poor in this country – people who were exploited,” she said. “I became friends with the people I ministered with and with those I ministered to – it was the Camelot of my life.”

Asked what was “unpredictable” about her religious life, she replied: “I never would have seen the extent to which I would strive to understand spiritual growth, as well as the darkness we experience in our lives, and then the whole renewal and beginning to see contemplative life through the cosmos and interconnectedness of things.”

Known for her interpretations of the works of mystic Carmelite saints including St. John of the Cross and St. Teresa of Avila, Sister Constance highlighted the importance of “putting love and goodness” in today’s world.

It’s doubtful that any of the consecrated women and men would describe their vocations as easy, but, as Daughter of Charity Sister Brenda Monahan, celebrating 25 years, noted: “God seems to be there when you need him.”

“I’ve been blessed with a great sense of joy throughout my 25 years,” Sister Brenda, who is principal of Mother Seton School in Emmitsburg, added.

Families must do more than just talk about religious vocations, speakers say