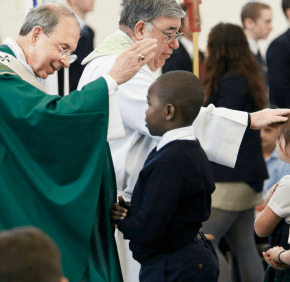 FREDERICK – Kicking off Catholic Schools Week with a Mass Feb. 1 at St. John Regional Catholic School, Baltimore Archbishop William E. Lori let students do much of the talking for his homily.

“Is anybody able to tell me anything about Mother Seton?” the archbishop asked, giving the students the opportunity to demonstrate their impressive knowledge.

One youngster volunteered that St. Elizabeth Ann Seton was the first native-born American saint. Another noted that she had founded early Catholic schools, launching a brief discussion with the archbishop on Catholic education in Frederick County and those who pioneered it, including St. Elizabeth Ann and Jesuit Father John McElroy.

“We should think about the people who way back when, when Frederick County was practically a wilderness, came here and started Catholic schools because they believed in the future,” the archbishop said.

Joining students from St. John were students and administration from other institutions of that legacy, including The Visitation Academy in Frederick, St. John’s Catholic Prep in Buckeystown, St. Thomas More Academy in Middletown and Mother Seton School in Emmitsburg, as well as representatives from the Friends of Catholic Education, a Frederick County nonprofit organization that supports Catholic schools and their students.

St. John parents Dawn Strayton and Mary Haley, who volunteered to organize the school’s Catholic Schools Week activities, had their own reasons to love Catholic schools.

“I always tell people that their expectations for academic achievement as well as behavior are high,” said Haley, who completed eighth grade at St. John in 1986 and has two daughters at the school, a three-year-old who will soon enroll, and a son at St. John’s Catholic Prep.

Strayton noted that not only do her children get a “great faith-based education,” but they are “surrounded by great people” and “are coming to school safely every day.”

Students recess down the aisle at St. John Regional Catholic School in Frederick at the conclusion of a Feb. 1 Mass marking the start of Catholic Schools Week. (Bill Ryan/Special to the Review)

“I like how it’s a friendly atmosphere and all the teachers are nice and everybody knows each other,” added her son, eighth-grader Drew Strayton.

He said he will “most likely” attend St. John’s Catholic Prep next year and hopes to work in journalism. Currently, he is anchor of Wildcat TV, St. John Regional Catholic’s television station.

Prior to the Mass, Karen Smith, principal of St. John, welcomed students back after a full week of snow cancellations and offered her thoughts on Catholic education.

“We know there is so much more to life than getting good grades,” she said, highlighting the importance of loving God and following his commandments.

“We know there is no better measure of success,” she added, “than the tangible presence of the Holy Spirit in our schools’ classrooms.”

To see more photos or to order prints, visit our Smugmug page.