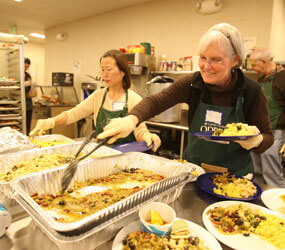 About 700 to 800 people file into Our Daily Employment Center in Baltimore City for its hot meal program that serves between 150 and 200 casseroles a day. In some years, the center gives out more than 250,000 feasts that include vegetables and other dietary necessities to the hungry. A stable of 30-40 volunteers help make those numbers a reality. But, as blizzards made their way through Maryland the last two weeks, the Catholic Charities-run resource was scrambling to find volunteers. Many regulars were barricaded inside their homes, requiring the organization to put a statement out looking for volunteers and food items like frozen lasagna and macaroni and cheese, milk, bread, instant mash potatoes and sugar.

The food was needed even more than usual because parishes and organizations that typically donate to Our Daily Bread were unable to make trips to the center safely.

“The demand is great,” said Renee Johnson, director of media and public relations for Catholic Charities.

Throughout the storms, Immaculate Conception parish of Towson still brought their popular meatloaf meals to Our Daily Bread, which has operated since 1981.

None of Catholic Charities various services closed during the storms.

About 400 people ate meals at Our Daily Bread Feb. 12, which came two days after the Baltimore area had been blanketed by another foot of snow.

The call for help was answered by usual volunteers such as Esther Jung and new ones including Tim Ramakrishnan, a student of the University of Maryland, Baltimore County. Catholic Charities’ executive director Bill McCarthy helped at Our Daily Bread during the week as well.

“It’s an incredible sight,” said Angelo Boer, Our Daily Bread’s director of development and communication. “Today we looked packed for volunteers. We still need food. There are a lot of great individual stories of people coming down through the snow and dropping off a couple gallons of milk and bread. We have people who have never volunteered their services. It’s just been great. If everyone pitches in just a little bit, it makes our job a whole lot easier.”

Jung, a native of South Korea, helped prepare desserts Feb. 12. She said she volunteers at Our Daily Bread because of the people it serves.

“They have no shelter,” Jung said. “They cannot sustain. It makes me sad.”

Ramakrishnan came to Our Daily Bread with several fellow students throughout the week after hearing about the need for volunteers. He assisted in the kitchen and served. During his time, he got to know the faces and personalities of some of those who were partaking in meals.

“Some of them crack jokes,” Ramakrishnan said. “They’re people. They were just really hungry. It was easy to talk to them. Some just wanted to talk about sports. For me, this is a unique experience, and it is really cool to see how everyone is served.”