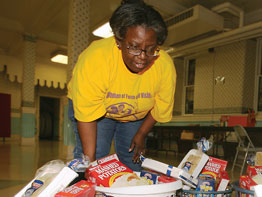 Morgan State University senior Cina Morris thinks her mother overextends herself with her never-ending volunteer projects. But St. Francis Xavier, Baltimore, parishioner Delease Ryce says it’s a labor of love that brings her too much joy to slow down.

“It’s true. I really don’t know how to say no when these volunteer projects come my way,” the 56-year-old Northwood resident said. “It’s just something that once you see how people appreciate what you are doing for them, it touches your heart and you just want to do more.”

Along with a full-time job at the Motor Vehicle Administration, Ms. Ryce juggles numerous volunteer activities, mostly revolving around her church.

She founded a Catholic Daughters of America court at her parish 24 years ago and the group prepares monthly meals for an AIDS hospice run by the Missionaries of Charity in East Baltimore, organizes supply drives for the Oblate Sisters of Providence and sets up holiday packages for the poor, among other projects.

“Anytime we need a volunteer for the church, no matter what it is, you can always count on Delease,” said Irene Tackett, parish secretary for St. Francis Xavier. “You can count on her to do anything. She is always willing to lend a helping hand.”

That facilitating spirit came to Ms. Ryce as a girl growing up in Charleston, S.C.

“My mother always told me that it was our duty as Christians to help others in need,” she said. “I’ve tried to instill that same value in my own daughter, as well. I feel like we have been blessed with a nice home, plenty to eat and wonderful friends. We should do what we can to help others achieve that too.”

Though Ms. Ryce has been involved with volunteer work from the time she was a child, she became a consummate advocate for the needy shortly after moving to Baltimore in 1973 as a way of meeting new people and building community.

“I was in a new city and I wanted to get to know people and develop friendships,” she said. “I thought folks who involve themselves in the church and with volunteer work would be good people to get to know.”

Though the work is often exhausting, Ms. Ryce said the satisfaction she feels from this ministry makes every drop of sweat from the labor seem sweet.

As she continues her volunteer work with the many other parishioners at St. Francis Xavier, Ms. Ryce hopes they are setting the right example for the youth in the parish, to breed a new generation of humanitarians.

“I’d like for them to know that you are not only helping others,” she said, “but helping yourself at the same time. There is no better feeling than when you know you have done something good for someone else. I want them to know that feeling.”