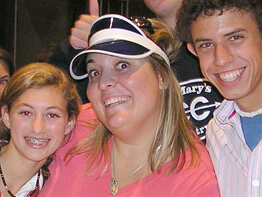 For Ginny Dauses, the 2,000 minutes included in her cell phone plan just aren’t enough.
After all, the St. Mary High School, Annapolis, campus minister is constantly fielding calls from young people who want to say hello, see how she is doing, talk about their problems or ask what is on the schedule for the new God Uniting Students program.

Hired just over a year ago to work with young people, Ms. Dauses, 28, has already made an impact at the Annapolis school. The vivacious campus minister made a point of having lunch with students from area high schools and attending school assemblies and sporting events to show support and learn more about the students. She then included the youth in the planning process for G.U.S., which now has 15 members.

“I quote St. John Bosco a lot who said ‘it is a sin to bore kids with the Gospel’ and I truly believe that,” said Ms. Dauses.

In her previous position at St. Francis of Assisi, Rockville, Ms. Dauses established the program Francis Religious ED which started with five teens. In three years, it grew to be 70 times that size, with 350 young people participating.

Ms. Dauses, who also served for a short time as St. Mary’s youth minister, said St. Mary’s is a large parish but the youth group only had a few teens involved and that was something she changed right away. She felt it was important to get to know the youth.

“If you get them to love you they will follow you anywhere,” Ms. Dauses said, quoting St. John Bosco.

The kick-off event to introduce the youth to the new G.U.S. program was a casino night where the youth could win prizes, socialize and grow in God’s love. The theme for the night and lesson to take home was “life’s a gamble but if you have God you always win,” said Ms. Dauses.

Ms. Dauses said the event was to show the teens that there is a place for them, somewhere they belong and where everyone else likes to hang out too. She said once you start to break down their protective walls, you can hit young people with the truth that “Jesus adores them.”

Other events she’s organized include lock-outs where teens remain outdoors to participate in laser tag, scavenger hunts or bowling. The students have also participated in many retreats such as the Baltimore Youth Catholic Conference.

“Ginny has just been an awesome person in my life,” said Paula Mazzeo, a senior at St. Mary’s. “She always seems to have the best advice and she incorporates some kind of Christ message in our conversations.”

Paula said G.U.S. helps her to better understand her relationship with Christ, others and even herself. She said some of her friends who attend “young life” at other parishes don’t get as much out of the program as she does in G.U.S.

“I love these kids and I think our world doesn’t hear enough about how great they are,” said Ms. Dauses. “I’m amazed at how much my faith grows with them.”

Ms. Dauses said she has truly become close to the students, and many visit her office throughout the school day, leave silly notes for her, invite her to family dinners and even call her in times of tragedy.

Ms. Dauses said it is her goal to introduce the students to Christ’s love, lead them to him and hold their hand as they walk together for those four years of high school.
“We are going to walk together on this journey,” said Ms. Dauses.