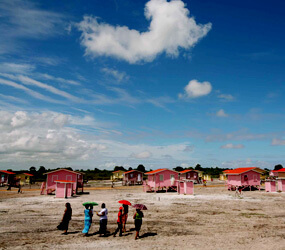 WASHINGTON – Joe and Judy Roetheli of Kansas City, Mo., made their fortune with a treat that cleans dogs’ teeth, and now the Catholic couple are using the fruits of their labor to house and feed those in need in far-off lands.

“We’ve been fortunate to have been successful and to have made the kind of money we’ve made,” said Joe Roetheli, 61, a parishioner of Holy Family Catholic Church in Kansas City. “There is only so much that we need and God wants us to do something righteous with our good fortune.”

Last October the Roethelis answered that call from God, partnered with the Florida-based Food for the Poor international nonprofit relief agency, and broke ground on the Lil’ Red Village, a 100-house development in Guyana, the only English-speaking nation in South America.

Their $800,000 contribution allowed Food for the Poor to build enough houses to shelter up to 600 people in the village and provide them with sanitation facilities, a community center, a school, several retail shops, a water tower, electric service and a 5-acre community garden to grow food.

Their path to building a village for the poor in Guyana began with their Catholic faith – and an intervention from two priests, one from Ohio and the other from New York, Joe Roetheli told Catholic News Service.

But, their means to be able to give so generously began much earlier, with an idea for a business and staggering achievement.

Roetheli was a federal government employee and his wife was a high school teacher in 1996, the year they invented “Greenies,” a dog treat that cleans the teeth of canines and freshens their breath.

By 2003 they had sold hundreds of millions of the dog treats, allowing them to form the Roetheli Lil’ Red Foundation, a charitable organization to help those in need.

“Judy and I have always believed that it is important to give back, whether it is to your local community or to the world as a whole,” Roetheli said.

Their foundation funds a pet visitation program in nursing homes, mostly in rural Missouri; helps finance documentaries and books; and with their involvement in the Guyana project it now has branched into building stable villages for the poor in developing nations.

The Roethelis got the idea of joining forces with a relief organization to build a village when a substitute priest came to their church and discussed the great need in third world nations like Guyana.

Shortly afterward, another visiting priest from New York told them about Food for the Poor and the work it was doing to help feed and house those in need in the Caribbean and Latin America.

“I almost see it as divine intervention twice,” Roetheli said. “Both times we heard things that we needed to hear.”

Initially, the couple had decided to develop their village in Jamaica, but after a year of trying unsuccessfully to get through government red tape in order to build, they moved the project to Guyana and broke ground on the Lil’ Red Village in October 2008.

“The Roethelis are amazing people and so generous with their talents, time, energy and money,” said Angel A. Aloma, executive director of Food for the Poor, during an interview with CNS. “They are a great example of altruism. They have taken the rewards of their labor and used it to help those in need.”

Last March – when the project was about 75 percent complete – the Roethelis made their first trip to Guyana to attend the dedication ceremony of the village they helped build.

“We were taken aback at the extreme poverty in that country, and even though the houses we built are not the kind of houses Americans would live in, it’s such an improvement from what they had,” Roetheli said.

Though he’d like to build another village soon, he said his foundation will have to recover from the financial hit it took when the stock market nose-dived in late 2008.

“We’ve got to weather the storm financially,” Roetheli said. “We took a monstrous hit. But, we’ll get there. I’m confident of that.”