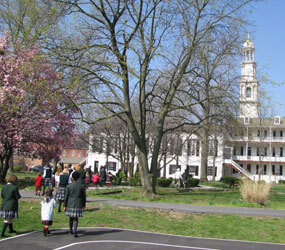 David Grove, acting president of the board of directors, announced May 1 that the all-girls private Catholic school has signed an agreement with the Sisters of the Visitation to purchase the campus on which the school has operated since 1846.

The cloistered sisters had lived in a monastery on the property and were affiliated with the school until leaving in 2005. With the sisters’ departure, Visitation Academy also discontinued a boarding program that same year.

Susan Chase, principal, said the school community is elated with the purchase. School leaders had looked at renting other buildings or buying land to build a new school, she said, but it was “always in our hearts” to remain at the academy’s original location.

“It’s a beautiful campus and it’s a safe campus,” Chase said, noting that the buildings are walled in on four sides. “It’s a very safe structure for the parents where they can feel like it’s a home away from home for the students.”

The campus includes a monastery that is connected to the school by a chapel. There is also a separate primary building, a carriage house and a small building used by intermediate grades.

The property was assessed at $4.8 million, but Chase said the school board has not disclosed the purchasing price. A capital campaign will be launched in the fall, she said.

As word gets out that Visitation Academy will stay in Frederick, Chase said she expects the academy will grow in the coming years. There are currently 142 girls enrolled in pre-K-8 – a 15 percent increase from last year.

“Stability is always important,” she said, “Especially now with Catholic schools going through the transition they’re going through, it’s important for parents to know that the school is going to remain open and viable.”

Chase said Visitation Academy offers programs not available elsewhere, including foreign language classes in Spanish and Mandarin Chinese and a tap-dance program. The math and science program has excelled, with students winning recognition at countywide academic events, the principal said.

Chase hopes to use some of the newly available space in the buildings to establish science laboratories, a media center and additional classrooms. A sports program was initiated this year, and the principal said the school can now offer on-campus athletics. A basketball court was refurbished this year and the school plans to soon erect a soccer field, she said.

“The students, faculty, family and friends are all very happy and relieved,” Chase said, noting that the purchase announcement came at the end of the annual May procession. “There was quite a hip-hip hurrah.”