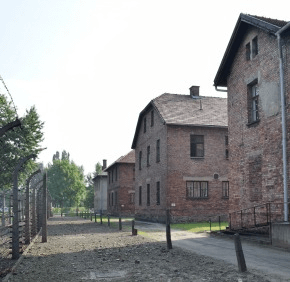 By Maureen Cromer
mcromer@CatholicReview.org
OSWIECIM, Poland – There is a meadow in this town in the south of Poland.
It is filled with flowers, honeybees and birds. It’s an image of serene beauty in an otherwise busy, polluted world.

There is one thing, however, that is different about this place.

Hidden beneath the shade of birch and pine trees occurred the greatest atrocity of modern history. Here, the Nazis systematically murdered over 1 million Jews, Poles, Roma and others.
The meadow lies within the barbed wire of the Auschwitz-Birkenau concentration camp.
From the very moment my fellow pilgrims and I from the Archdiocese of Baltimore stepped off the bus onto these grounds July 25, there was absolute silence. It wasn’t as if we were not allowed to speak, but almost as if we were stripped of the ability.
There is no possible way to prepare oneself for what lies beyond the gates of this hell on earth.
Above the gravel road leading into Auschwitz, “Arbeit Macht Frei” – translated to “work will set you free” – hung above us like the empty promise it was always meant to be.

(Maureen Cromer/CR Staff)
I could not help but think to myself as I walked through these gates, innocent lives were taken from those who walked the same path I was now on.
The air had escaped my lungs. The joy was stolen from the world around me. The sound of gravel beneath our feet sounded more like the crunching of bones left here so many years ago.
As my walk around the camps continued, I found myself looking from the faces of those innocent lives in the surrounding photos back to the ground. At what point in my journey was this the last footstep another life ever took?
Beyond the deafening silence you could hear the birds above us. They were not singing the usual tune of a summer bird. Instead, they circled and cawed above us as a reminder of the death that still hung in this air.
Even now, hours later, there is still a chill in the air around us, the smell of death in our noses. As we walked through the camps, we could not miss the extreme thought put into so many small details within the confines of these walls.

So many things done by Nazi soldiers with incredible skill and ease – as if it were second nature to them. Actions and thoughts that showed that the only end in the minds of these men was extinction.

En route to World Youth Day in Krakow, as the pilgrims and I reflected on the day’s events, we were reminded that life is not about what’s easiest or most efficient, but what’s true. There is no end, no desire for power or wealth.

Today, we know that nothing can truly get in the way of that supreme good – the dignity of the human person. For it is not about how useful one is to society, but it’s about one’s worth – for we are made in the image and likeness of God.