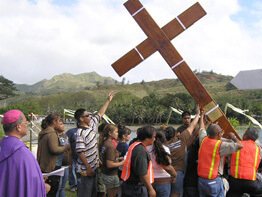 TUMON, Guam – Thousands of Catholic youths and young adults opened their arms to welcome the World Youth Day cross and a Marian icon to Guam March 8-11.

Guam was the first stop in the Mariana Islands for the symbols of the world’s largest youth event which have traveled tens of thousands of miles around the world.

The symbols will travel through 20 nations in Asia and Oceania and then through 28 Australian dioceses before they arrive at the World Youth Day opening Mass July 15, 2008, in Sydney.

In Guam, at Blessed Diego Luis de San Vitores Church in Tumon, Archbishop Anthony Apuron of Agana hailed the arrival of the cross and icon as a great blessing for the island. They were brought to the church directly from the airport.

It was fitting their first stop was Blessed Diego Church, named for the Jesuit martyr who established the Catholic Church on Guam about 400 years ago.

“Welcome to this blessed ground which our forefather Blessed Diego Luis de San Vitores paved for us here on our island,” Archbishop Apuron said.

From the church the archbishop led children, teenagers, young adults and even elderly people in a four-day pilgrimage that spanned the length of the island.

The pilgrims escorted the cross and icon to each of the Archdiocese of Agana’s 25 parishes.

Each parish held a prayer service. Some featured youths depicting Jesus, Mary, the disciples and Roman centurions during the Stations of the Cross.
With a few exceptions because of dangerous road conditions or especially long distances, pilgrims traveled by foot to each parish, with youths taking turns carrying the heavy wooden cross on their shoulders. They covered about 24 miles that included traveling along winding, hilly roads.

Just a few days before the start of the pilgrimage, the island was deluged by heavy rains, but the pilgrims on this trek were greeted by beautiful weather.
Many Guam youths were visibly touched as they welcomed the World Youth Day symbols.

“Once it came it was like sort of a life-changing experience,” Katrina Quinata, 14, said about the cross.

“You never would have known what you would feel just looking at it and seeing that you’re able to touch it, a cross that has been going around the world,” she told The Pacific Voice, the archdiocesan newspaper.

Katrina, a member of San Dimas and Our Lady of the Rosary Parish in the southern village of Merizo, was among more than 300 people who welcomed the cross March 10.

She and other youths knelt by it with a few adults. Tears streamed down the faces of many of them.

“I put myself in the presence of God and I just thought of seeing Christ right in front of me,” Quinata said.

At St. Jude Parish in Sinajana, Father Gus Gumataotao reminded people that the crucifixion of Jesus “was not to end in sadness but in joy because he rose from the dead.”

“So this symbol is the symbol of the love of Christ,” said Father Gumataotao. “We’re so important to him that the Lord Jesus Christ who loves us so much was willing to suffer –- carry the cross to be crucified on it because of us.”

Young Catholics also gave testimonials that inspired. At St. Joseph’s Church in Inarajan, religious education teacher Natasha Afaisen described how turning to Jesus on the cross lifted her up from a dark and difficult time in her life.

“Anytime you feel like that, turn to the Lord,” she told the group. “Turn to our God, because he answers all our prayers.”

At the conclusion of the pilgrimage, about 3,000 people joined Archbishop Apuron at Santa Barbara Church in Dededo.

During the closing Mass, the archbishop called on Guam’s youths to follow the steps of Jesus in all that they do.

“I ask you this Lenten season to return to God and receive the grace you need today to bear fruit,” he told them.

“Make use of your time in positive and constructive ways to help build your self-esteem,” the archbishop said. “Begin to prepare yourselves to welcome Christ in your hearts and in your lives and let us help to make the world and our community, our families, ourselves better in the sight of God.”