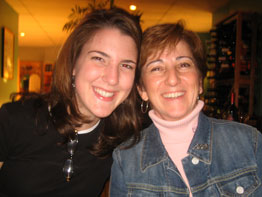 WASHINGTON – Before April 16, 2007, Marian Hammaren of Westtown, N.Y., thought she knew what she’d been put on the earth to do: to be Caitlin’s mother, to guide and protect her.

But 19-year-old Caitlin Hammaren, a sophomore at Virginia Tech majoring in French and international relations and an only child, did not survive the tragedy on campus that day and Marian Hammaren was left wondering: “What’s my job now?”

In a May 30 telephone interview with Catholic News Service, Mrs. Hammaren described the dark times that followed the campus massacre that left her daughter and 32 other students and faculty members at Virginia Tech dead. But she also spoke about a book that “set me back on the journey to God” and helped give her a new role in life.

“Despair doesn’t even describe it,” she said of the weeks following her daughter’s death. “Heavy-hearted is a word you don’t even grasp until you go through something like this.”

Mrs. Hammaren and her husband, Chris, were at home, an eight-hour drive from the Blacksburg, Va., campus of Virginia Tech, when news reached them of the campus massacre. Unable to reach Caitlin by cell phone, they jumped in the car and began calling their daughter’s friends, the police and Blacksburg-area hospitals – anyone who might have news.

By the time they reached the campus, “I was hoping for a gurney at the hospital,” Mrs. Hammaren said. “I knew something was really, really, really wrong.”

When the bad news was confirmed, Mrs. Hammaren said she was “truly numb.” She spent the next few days comforting Caitlin’s friends and helping them “say a final goodbye” at a memorial service in Virginia.

She discovered in Caitlin’s dorm room that “she was very religious, more than I actually knew,” Mrs. Hammaren said. Among the books at Caitlin’s bedside were an old catechism, a Bible, a book of quotes from Mr. Rogers and a book her father had recently bought her about “1,001 things to do before you die.”

Raised a Catholic but “not practicing as I should have,” Marian Hammaren said she found little comfort in her faith in those first dark weeks after the tragedy.

Because shopping had been a favorite mother-daughter activity, she had been avoiding malls. But one day while waiting for her husband’s car to be finished at a repair shop in the mall, she found herself in a bookstore and was drawn to the religion section, where Anthony DeStefano’s “Ten Prayers God Always Says Yes To” caught her eye.

“I thought, ‘Yeah, right. Well he didn’t answer my prayer,’“ she said. But she continued looking through the book, then bought it and took it home.

That book led her to the Bible and other spiritual writings and to “A Travel Guide to Heaven,” an earlier book by Mr. DeStefano, executive director of Priests for Life.

One day in her garden she began screaming at God about the injustice of Caitlin’s death. “I taught her to trust you. Where were you?” she recalled yelling. “I need to touch her hair, I need to hear her voice.”

But Mrs. Hammaren said “God didn’t mind the little beating up I gave him” and graced her with a “very calm, gentle thought: ‘If you want to see her, you have to go through me first.’“

Eventually she came to realize that “when Catie was alive, we were just her baby sitters here on earth,” she said. “I had to get past the fact that there could be a better parent than me, and understand that she was in the best hands possible.”

That understanding and the hope that she will see her daughter again in heaven “helped me get out of the despair, out of the blackness,” said Mrs. Hammaren, now an active member of the Church of the Holy Cross in South Centerville, N.Y. Her renewed faith has brought so many questions, however, that “Father Bob is getting sick of me,” she said with a laugh, referring to Father Robert Porpora, the pastor.

“I’m happy to be home,” she said of her return to the faith. “I did not get it before. My daughter got it more.”

And Mrs. Hammaren sees a new purpose in talking about the journey she has taken. “If I can get one other person back to God,” she added, “then I think I’m doing what he wants me to.”