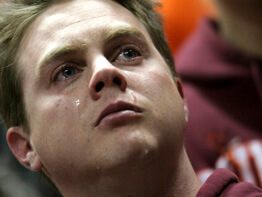 ROANOKE, Va. – Deacon Michael J. Ellerbrock of St. Mary Parish in Blacksburg had just wrapped up his 9 a.m. class at Virginia Tech in Blacksburg April 16 “when it all happened,” he said.

A gunman, later identified by police as student Cho Seung-Hui, shot and killed two people in a residence hall and then went to Norris Hall, an engineering building, where he killed 30 others and wounded many others before taking his own life.

Deacon Ellerbrock, a professor of natural resources and economics education at the university, told The Catholic Virginian, Richmond diocesan newspaper, that he walked to Squires Student Center “and watched it all unfold on TV” along with students.

As soon as the shooting stopped he went to Norris, where he was met outside by state trooper Andy Mitro. Mitro, a parishioner from St. Mary, knew him as a deacon and allowed him to get information from law enforcement officers on the scene.

“One officer told me an ROTC student grabbed (Cho) from behind and got a bullet right to the head,” Deacon Ellerbrock said recalling the awe that struck him in the first minutes afterward as he stood on the lawn of the classroom building where the massacre took place. “It’s beyond comprehension how one person could kill so many with just two guns.”
He added that another officer described the scene inside to him: “He said, ‘It’s a slaughterhouse in there.’“

Later in the afternoon, Deacon Ellerbrock would learn that a fellow St. Mary parishioner, Kevin Granata, a professor of engineering science and mechanics, was killed.

He also would find out that one of the two victims Cho shot in the residence hall was one of his own students, Ryan Clark. “He was a good student in both science and religion class,” Deacon Ellerbrock noted. “He was just a lovable young man.”

As the chaotic campus scene turned to general shock and later grief, Deacon Ellerbrock and St. Mary pastor Father James Arsenault joined area clergy ministering to families and students at the Inn at Virginia Tech, a hotel that serves the campus. It became central headquarters for victims’ loved ones and media briefings.

Father Arsenault had been called to Montgomery Regional Hospital at 8 a.m. At the Inn at Virginia Tech, he was called on to help notify families. Deacon Ellerbrock said the priest spent quite a lot of time with the families who came to the center.

Father Arsenault said later that he was there until after midnight.
Linda Granata, the wife of Kevin Granata, was one of those that he and Deacon Ellerbrock spoke with. “She was standing,” the deacon said, “but she was crying real hard.”

For Deacon Ellerbrock, the day’s ministry was simply one of presence. As both professor and clergy, he has long been a favored counselor, both formally and informally, among students on campus who know him.

“That was the role I played” in the morning with students and that evening with families, he said. Of the latter he said, “I just sat with them. We tried to find private rooms for each family but it was difficult.”

In the evening Father Victor Quagraine – a graduate student at Virginia Tech who helps out with campus ministry – celebrated Mass in the center’s chapel.

Father Rob Coles from Our Lady of Nazareth in Roanoke went to Blacksburg to preside at Mass at St. Mary Church as Father Arsenault was occupied with pastoral care.

Father Coles said the Mass was mostly attended by students. “It was very somber but at the same time we live in God’s hope and mercy,” the young priest said, adding that those assembled were appreciative of the Mass.

By that time members of the national media were everywhere in Blacksburg, including St. Mary. “Before Mass I said no press,” Father Coles said. “But somehow after Mass there was a huge amount of them. But they were pretty respectful, talking to people as they left Mass. Most of them asked people if they could talk with them and if they said ‘no’ they left them alone.”
Father Patrick Golden, pastor of St. Jude Parish in nearby Radford, also spent much of April 16 and 17 visiting area hospitals and helping out on campus.

By April 17 the staff at the Newman Center was declining calls from the press, explaining that they wanted to “focus on the needs of the students.” Campus ministers from neighboring colleges and others came to help.

Father Coles said that on the morning after the massacre the Catholic clergy who had gathered to minister during the crisis discussed how best to support the spiritual needs of the community.

He said they decided to attend the campus-community candlelight vigil service that evening on the Drillfield, a large open field in the center of campus, “helping to provide candles – they need a lot of candles – and be a presence here.”

Staff at St. Mary Parish and the Newman Center said their phones rang constantly all day as they worked to determine how best to serve everyone coming to them for help.