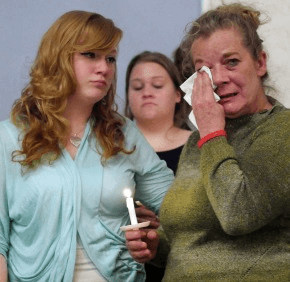 WESTMINSTER – An overflow crowd of nearly 400 people sat in stunned silence as the images of dozens of people flashed overhead on a large screen at St. John’s Portico in Westminster March 26.

The photographs showed men and women who had recently lost their lives to prescription drugs or heroin – many in their late teens and early 20s.

“These are mothers, fathers, sisters, brothers and friends who are no different than anyone else,” said State’s Attorney Brian DeLeonardo, noting that in a recent stretch of less than three years, 79 people died of overdoses in Carroll County. “The face of addiction comes in many forms.”

The pictorial tribute was part of a drug overdose and prevention vigil hosted by the Office of the State’s Attorney for Carroll County.

Designed to shine a light on what DeLeonardo called “an epidemic that has too often been hidden in the darkness,” the event culminated in the reading of victims’ names as loved ones lit candles and huddled around a large table filled with framed pictures of the deceased.

In his keynote address, Keith Mills, a sportscaster for WBAL-TV and radio, told the crowd how his battle with pain medication nearly destroyed him. Suffering from back pain in the late 1990s, he got hooked on hydrocodone after taking the powerful medication prior to covering a baseball game at Mount St. Joseph High School in Irvington.

“Five years later,” he said, “I was fighting an incredible narcotic addiction to this little pill who didn’t give a snot as to who I was, what I did, where I came from, who my parents were or the fact that I had talked to Muhammad Ali or Michael Jordan.”

Breaking the law “numerous times,” Mills said he forged a doctor friend’s signature on a prescription and, ultimately, was arrested in 2006 after stealing pain medication from a neighbor in Anne Arundel County. The arrest resulted in difficulties in his family and the loss of his job at WMAR-TV, then his employer.

Mills, now drug-free, begged anyone considering using powerful substances such as heroin to look in the mirror and reconsider.

Beth Schmidt, whose son, Sean, died of a heroin overdose in 2013, said it is critical to lose the stigma involved in drug addiction. Her son told her he was ashamed of himself and wanted to handle his problem on his own. That was an impossible task, she said.

“They can’t get out of it alone,” Schmidt said, “and we need to be there to help them.”

Tim Weber, a former heroin and cocaine addict who lived in homeless shelters, missions, jails and under a bridge for 13 years, said he found help in a sober house and a 12-step program. Today, he helps others in recovery.

“I learned early on, in order for me to stay clean and sober, I have to help other people,” he said.

Monsignor James Farmer, pastor of St. John and an advocate for increased support for addicts in Carroll County, told the Catholic Review his parish is honored to partner with Weber and others to address drug addiction. A Heroin Anonymous program, initially based on the parish campus in 2013, relocated after outgrowing the location.

“Addiction has the ability to totally destroy a human being,” Monsignor Farmer said. “St. John’s Church is trying to help people with the gift of healing. Jesus can heal anything. The power of Jesus is stronger than the power of addiction.”

Following the vigil, Tina Higgins of Frederick County clutched an extinguished candle she lighted in memory of her brother, Tony, who died of addiction a year ago. The event helped in her own healing, she said.

“To be with other people who are in the same shoes as we are means a lot to me,” she said, noting that her brother had an unborn son at the time of his death. The baby is now four months old.