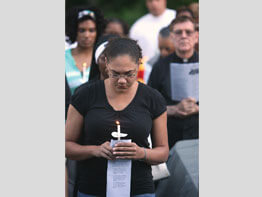 The sound of the gunshots that claimed the life of her 22-year-old nephew, Derrell, and wounded her son Brandon, 21, on the streets of West Baltimore still reverberate in her mind.

In the days leading up to the shooting at the corner of Clifton Avenue and Rosedale Street, her son had rejected the overtures of a local gang. The values Brandon learned from his mother and the family’s parish of St. Cecilia two blocks away taught Brandon to distrust those tenuous brotherhoods. Brandon and his cousin, however, tasted their vengeance.

“It happened so quickly,” Ms. Smith said. “There wasn’t a lot of time to think because I was asleep and the gunshots were so close. I knew it was right there where I lived at, but then when I opened the door, I just lost it because there was so much blood. It’s just a bad tragedy. The gangs … it’s bad for the young people coming up.”

While Brandon recovers under protective custody, Ms. Smith is finding out she is not alone in wanting an end to the bloodshed.

On June 16, she walked with her neighbors, friends, fellow parishioners and religious leaders like Bishop Denis J. Madden, urban vicar, in a rally called “Prayer Vigil for the Healing of Violence in Our Neighborhoods.”

“The violence needs to stop,” Father Sylvester Peterka, C.M., pastor of St. Cecilia, Baltimore, told the crowd of nearly 100 people before imploring prayer. “(Mayor Sheila Dixon) can have programs, and I want her to have programs, and the politicians can have ideas, and I want them to have ideas. But, unless we understand the source of healing and the source of peace, it’s not going to happen.”

Residents of the surrounding unsafe streets said they pined for the older days of the neighborhood, when parents not only looked out for their own children, but for others as well.

Ms. Smith clutched the hand of her daughter, Madison Wells, 9, as the crowd walked the surrounding blocks of the neighborhood and sang “We Shall Overcome,” “This Little Light of Mine” and recited the “Peace Prayer of St. Francis of Assisi.”

As the group arrived at 3100 Clifton Ave., the site of the shooting, Bishop Madden led the group in prayer, saying: “Anyone can seek vengeance. Anyone can strike back, but it takes someone full of faith, courage and strength to love at a difficult time.”

When the two-hour rally came to an end at sunset, Bishop Madden looked at the crowd exchanging embraces and handshakes and felt a change in the winds.

“It really is a blessing,” Bishop Madden said, “and we hope that we will go to different parts of the city throughout the year and bless … with our prayers and calling Christ to be present with us.”

The Archdiocese of Baltimore will be active in the next few weeks in attempting to stop further violence, including hosting a gun turn-in at St. Gregory the Great, Baltimore, on June 21. A “Information is Power” gang discussion for adults will take place July 1 at St. Cecilia, and another prayer vigil will be hosted at St. Gregory July 21.