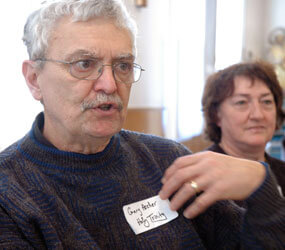 PORTLAND, Ore. – Gary Ascher has a good life. Amiable and bright, he’s in a long-lasting marriage. His children are high-achieving. He holds down a steady job making patterns for cast metal machinery.

But for more than 40 years, Ascher has yearned to pacify his conscience. A U.S. infantryman in Vietnam between November 1967 and November 1968, this gray-haired man with intense brown eyes wonders how he can be forgiven for taking lives.

“Yes, I was defending myself, but we were the initial aggressors,” said the 62-year-old member of Holy Trinity Parish in Beaverton. “We were sent out in hopes we would be ambushed.”

Ascher, who plays guitar for his church choir, was one of 15 people with links to the military who came to Our Lady of Peace Retreat House in Beaverton in December for a weekend on war and healing. Leaders of the session know that the conflicts in Iraq and Afghanistan mean more retreats will be needed in the future.

Father Michael Drury, a former military chaplain from Montana, reminded the group that there is such a thing as a just war in Catholic teaching. It’s a fight “when there is an unjust aggressor who cannot be stopped by any other means.”

Ascher is not convinced Vietnam fit the definition.

“Is some kind of killing OK? I’m not sure,” said Ascher. “If some enemy were marching down the street or if I were threatened, I would sign up today. But I wouldn’t go to another Vietnam. I have struggled with this my whole life.”

Others on the retreat sought to comfort Ascher, saying he was a “cog in a machine” who bears no personal guilt or that his service in Vietnam was one part of the eventually successful fight against communism.

But Ascher finds little relief in sweeping views. He’s focused on the human and the particular, like the shapes of those slim, small soldiers at whom he fired his M-16, or the face of his pal Bob, a fellow Oregon boy who didn’t make it home.

Ascher grew up in Portland and was pursuing a career in pattern building when his draft number came up. He was 20.

Originally slated for the 1st Infantry Division, he was rerouted to the 25th, 2nd battalion, 12th Infantry, which had suffered heavy losses and needed replacements. The 25th fought some of the toughest battles of the Vietnam War, trying to cut off the flow of supplies and troops from the Ho Chi Minh Trail.

The fighting took 25 of his company, including Bob, to whom Ascher had spoken shortly before his gruesome death.

As he stepped off the plane on his return from Vietnam, protesters blocked Ascher’s way and called him a war monger and a baby killer.

He took up work in a sheet metal shop, picked up his old pattern-building career and started a family with Laverna, a Catholic girl with roots in Washington County.

“If you ever knew me, you wouldn’t know I was suffering,” Ascher said.

Laverna, of course, knew. She was beside him for the nightmares. She could not wander up behind him without a high-octane reaction. She saw her husband scanning the ground as he walked, watching for mines and booby traps.

On Veteran’s Day 2006, Ascher finally brought himself to visit Bob’s family in the small town of Eddyville. He and Laverna found Bob’s grave and a town war memorial that included Bob’s name. Then they found the family home. At the door, he grew faint when Bob’s 84-year-old father answered and bore a striking resemblance to his dead friend. Everyone wept.

“As we shared stories, I could feel Bob’s spirit,” Ascher said. “The small amount of pain that it cost me was offset by the joy it gave his dad. … My trip to Eddyville got me thinking there is some good in life.”

Ascher returned home and went to Mass with his wife, as he had on occasion for years. That day at Holy Trinity, Father Dave Gutmann gave a homily contrasting false guilt and true guilt. The notion hit Ascher between the eyes.

He went to visit the priest and that began a series of conversations that led to Ascher’s baptism in April 2009.

During Mass at the Beaverton retreat, the readings explored cures and exorcisms carried out by Jesus and his followers.

“God does these healings not just in the past, but today,” said Father Drury, who led sessions that focused on war and peace in the Scriptures and on the traumas of war.

“When we are healed, it is to bring the light of Christ to others,” the priest said.

After the homily, Ascher left his own needs behind for a moment and prayed instead for people suffering during hard economic times.