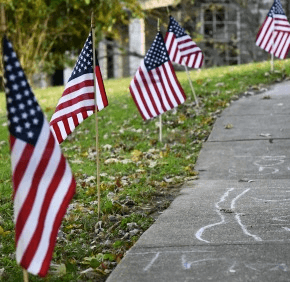 By Maureen Cromer
mcromer@CatholicReview.org
ELLICOTT CITY – Long before he was asked to give the homily at the annual Veterans Day Mass at St. Paul’s Church in Ellicott City, Father Daniel Goulet reflected on what the observance means to him.
While on a trip to England with his mother, Father Goulet made a long-awaited pilgrimage to Canterbury where one scene in particular stood out.

“Standing on what was once a refectory, I looked down and saw a bunch of poppies growing,” Father Goulet said, of the flower that symbolizes military service in the nations that formerly comprised the British Empire. “This struck very close to my heart as it made me reflect upon my long service to the United States Army.”
Father Goulet graduated from Portland High School in Maine, then entered active duty with the Army in 1992. After completing the Rite of Christian Initiation of Adults program, he heard the calling to enter the priesthood in 2001. Father Goulet was accepted as a co-sponsored seminarian for the Archdiocese of Baltimore and the Archdiocese for U.S. Military Services and attended St. Mary’s Seminary and University in Roland Park.
He has served in Afghanistan, and told the Catholic Review he is now recruiting chaplains for the Archdiocese for U.S. Military Services.
On this Veterans Day, more than 60 people gathered at St. Paul’s to pay homage to all those who have served in the U.S. Armed Forces.

Don Carter, a major in the U.S.,  and his wife Stephanie, present the offertory gifts to Auxiliary Bishop F. Richard Spencer of the Archdiocese for U.S. Military Services, and Deacon Joseph Knepper, Nov. 11. (Kevin J. Parks/CR Staff)
Also joining the celebration was Bishop F. Richard Spencer, auxiliary bishop for the  Archdiocese for U.S. Military Services, who was an Army officer before entering the priesthood in the Archdiocese of Baltimore. He is a former pastor of Western Maryland’s St. Peter the Apostle in Oakland.
“The 11th hour, the 11th day, the 11th month,” Bishop Spencer reminded the attendees, “we have gathered to remember, to look backwards, to look at the present, and now to look forward again.”

The 11 a.m. Mass was filled with prayer, pride and patriotism as it included a wreath-laying ceremony, the singing of the Star Spangled Banner and the playing of Taps in honor of all those who have died serving the United States.

Following Mass, those in attendance were invited to the parish hall for lunch, a display of military memorabilia and the sharing of stories.

For more photos or to purchase prints, visit our Smugmug page here.

Baltimore priest who served in Iraq ready to become a bishop