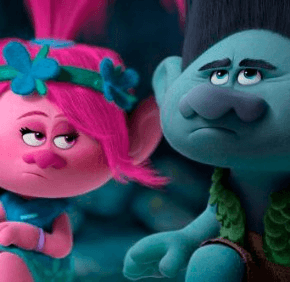 NEW YORK – Parents trolling for family fare at the multiplex need look no further than “Trolls” (Fox).
This loopy but charming animated comedy – which, happily, has nothing whatever to do with bad behavior on the internet – makes enjoyable viewing for a wide range of age groups, excluding only the very youngest.
Though its originates with a product line of plastic dolls, directors Mike Mitchell and Walt Dohrn’s infectiously fun 3-D fable feels more like a party than a commercial. In fact, the best way to gauge the sensibility underlying their brightly hued, music-laden celebration might be to imagine a preteen girl taking over a 1970s discotheque.
Said lass would no doubt identify immediately with our heroine, an irrepressibly sunny optimist named Poppy (voice of Anna Kendrick). But she would likely feel far less kinship with Poppy’s companion on the quest to which most of “Trolls” is devoted, Woody Allen-like perpetual worrier Branch (voice of Justin Timberlake).
This odd couple is thrown together and forced to hit the road after several of their friends are kidnapped by an evil – and otherwise unnamed – Chef (voice of Christine Baranski) from a race of Troll-eating giants called Bergens. Bergens, so we’re informed, believe that their only source of happiness lies in a tummy full of Trolls.
So it’s up to Poppy and Branch to save an ensemble of their pals – including Biggie (voice of James Corden), the community’s unofficial leader, and DJ Suki (voice of Gwen Stefani), its top tune spinner – from being served up in a stew or a casserole.
In true storybook fashion, the success of their enterprise turns out to depend on the secret, seemingly hopeless love harbored by Chef’s sensitive – and much put-upon – scullery maid, Bridget (voice of Zooey Deschanel), for the young ruler of the Bergens, King Gristle (voiced by Christopher Mintz-Plasse).
As the titular creatures sing, dance and group-hug their way through the proceedings, screenwriters Jonathan Aibel and Glenn Berger promote loyalty and teamwork. They also showcase the transformative power of romance – the spell of which is cast, predictably enough, over others besides Bridget.
Only the looming threat of one set of characters consuming another, along with touches of slightly naughty humor, indicate that “Trolls” is not a good choice for the smallest moviegoers.
The film contains a flash of rear nudity, brief scatological humor and wordplay and a few very mild oaths. The Catholic News Service classification is A-II – adults and adolescents. The Motion Picture Association of America rating is PG – parental guidance suggested. Some material may not be suitable for children.
Copyright ©2016 Catholic News Service/U.S. Conference of Catholic Bishops.