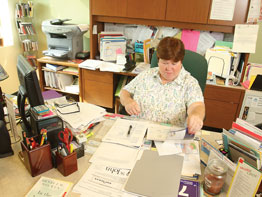 Schooled by sisters in habits, they began their own careers as educators when high-tech meant a ditto machine and an overhead projector.

“I love what I do, and part of what I love is the challenge,” said Karen Smith, the principal of St. John Regional Catholic School in Frederick. “I usually have to come in on the weekend to make sure that my desk is completely clear on Monday.”

Mrs. Smith was a college student in 1969, when man first walked on the moon. In 1972, multitasking meant teaching every subject to her fifth-grade class at a parish school in New Jersey, where the students were likely to be Little League teammates and attend the same Sunday Mass.

Today, she oversees a student body of 600 that draws from eight Frederick County parishes and the Catholic community of Fort Detrick; approves a fundraising committee that helps keep parishioner tuition less than $6,000; directs a staff of 60; monitors rising energy costs; and referees the escalating debate that pits textbooks against technology.

Mrs. Smith has a rare perspective on that issue, as in 2000 her husband’s career brought them to the technology corridor along Interstate 270, which links Frederick to the Capital Beltway. Her master’s degree includes a concentration in learning technology.

“Every workshop we attend, you hear that this is the first generation where the kids know more about computers than their teachers and parents,” Mrs. Smith said. “Technology can be a great educational benefit, but we’re adding ethical and legal concerns.”

When Mrs. Smith was a schoolgirl, acting up might have meant a spitball flung to a chalkboard. Today, she has her antenna up for cyber-bullying and plagiarism, which is as easy as cut and paste.

“It’s scary stuff, some of the issues that need monitoring,” she said. “Networking sites ask users to sign minimum age agreements, but it’s much too easy for a sixth-grader to say that they’re 17. That opens a whole new set of dynamics.”

If information has become easier to access, so have educators, by helicopter parents.

“Parents send you an e-mail at 9 a.m., and they expect a response by 9:05,” Mrs. Smith said. “If you don’t get back to them within two hours, they think you’re ignoring them. It can add a dimension that you’re basically on call all the time.”

Karen Murphy, the principal of Resurrection-St. Paul School in Ellicott City, said education’s biggest challenge is “what do we do with the cell phone.”

“We have to teach where the children are, but you can’t embrace technology without understanding the repercussions that come with it,” Mrs. Murphy said. “After 9/11, I have to have the parents trust me that I know what I’m doing. We can’t have students giving parents information in an emergency situation.”

The two are forming a support group for principals.

“Priests have their own Emmaus groups,” Mrs. Murphy said. “We need to take care of ourselves. This position isolates you because you’re always answering to people. It can be lonely; there’s not a lot of affirmation.”

Like Mrs. Murphy, Mrs. Smith was educated in a parish school, when tuition wasn’t an issue because religious orders, like the School Sisters of Notre Dame, handled classroom instruction.

Mrs. Smith oversees a facility that opened in 2006. The curriculum includes a chemistry lab, and religion, daily from pre-kindergarten to eighth grade. Nonetheless, that’s not as easy to integrate into the curriculum as it was in the 1960s.

“When I began teaching in Catholic schools, there was always a sister as the principal, at the least,” Mrs. Smith said. “That’s a concern, that our students don’t see religion the way we did and aren’t exposed to vocations. It’s one of the things we’re trying to solve.”

“The things that made our Catholic education special are the things that parents want today,” Mrs. Smith said. “One of our themes this year is back to the basics. … We’re going to emphasize penmanship.”