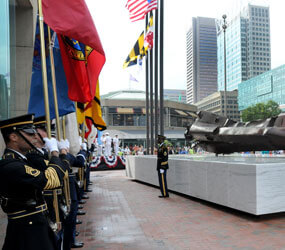 Her 11-year-old brother, Justin Jr., is also too young to remember the events of Sept. 11, 2001, but the siblings were nonetheless at the Basilica of the National Shrine of the Assumption of the Blessed Virgin Mary in Baltimore Sept. 11, when Archbishop Edwin F. O’Brien led a vespers service to commemorate the victims of the terrorist attacks of 10 years ago.

“It was the most significant event of its kind in our nation since John F. Kennedy was assassinated (in 1963),” said Justin Sapp, their father. “We initially planned to go to Manhattan, for the unveiling of the memorial garden (on the site of the World Trade Center’s twin towers). That didn’t work out, but we still wanted to take a little time out of our day to remember.”

Sapp, a parishioner of St. Elizabeth of Hungary in Highlandtown, was also joined by his mother, Shirley Sapp, and stepdaughter, Taylor.

“Taylor knows a little more about 9/11 from a historical perspective,” he said. “My son (Justin Jr.) has heard about it a bunch of times. You could feel the emotion in the voices of the choir (at vespers), and I know that touched them.”

The service was attended by several hundred, including clergy such as Monsignor Richard Woy and religious women from the Dominican Sisters of St. Cecilia, who teach at Mount de Sales Academy in Catonsville, and the Little Sisters of the Poor. In addition to Monsignor Arthur Valenzano, rector of the basilica, several pastors from Baltimore City were at the prayer service, including Pallottine Father Salvatore Furnari (St. Leo, Little Italy), Father Richard Lawrence (St. Vincent de Paul) and Father Donald Sterling (New All Saints).

Father Michael Roach, pastor of St. Bartholomew in Manchester, brought several seminarians from Mount St. Mary’s University in Emmitsburg, where he is an instructor.

“Why should we not be here?” Father Roach answered, when asked what brought him to Baltimore. “This is the archdiocese’s observance, and how many more times are we going to get to see our archbishop? He’s been so good to our priests.”

Archbishop O’Brien, now the apostolic administrator of the archdiocese following his Aug. 29 appointment as pro-grand master of the Equestrian Order of the Holy Sepulcher of Jerusalem, read a letter from Pope Benedict XVI to the U.S. Conference of Catholic Bishops on the 10th anniversary.

Earlier in the day, Archbishop O’Brien referenced 9/11 as he celebrated the first Mass in the chapel at the Maryland Province Jesuits’ new St. Claude La Colombiere residence in Baltimore.

“It would be virtually impossible to stand at a pulpit on this day without mention of the incomprehensible tragedy of a decade ago,” he said. “In our prayer we remember the victims of that day’s terror attack as well as the heroic first responders who sacrificed their lives. We pray for the families of all those who died and for the deep void that fills thousands of hearts still aching over the loss of loved ones.”