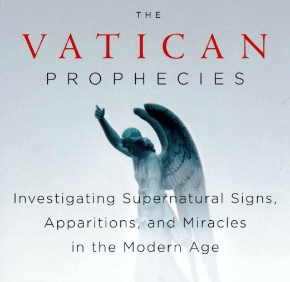 His duel with Satan one morning in 1982 “felt like ‘a biblical scene,'” St. John Paul II later “would tell a top aide.”

In “The Vatican Prophecies: Investigating Supernatural Signs, Apparitions and Miracles in the Modern Age,” John Thavis describes what happened that morning when a bishop and parish priest brought a woman named Francesca, “thrashing and cursing loudly,” to the Vatican Apostolic Palace where her encounter with the pope occurred.

Entering a dimly lit room, Pope John Paul approached Francesca and began “pronouncing the formulas of exorcism,” Thavis writes. Francesca’s writhing and moaning continued, but when the pope said he intended to celebrate a Mass for her the following day, she suddenly grew calm. “The demon appeared to have departed.”

A cardinal’s memoirs “later provided an eyewitness account” of the pope’s encounter with Francesca, Thavis states.

Do popes directly combat the demonic? Thavis says that for centuries the Catholic Church kept not only devils, but angels in “the theological background,” not wanting to distract Christians from their salvation journey centered on Christ.

Reports circulate, however, that Pope Francis took on a demon when he encountered a man called Angel among sick people awaiting a papal blessing after the 2013 Pentecost Mass in St. Peter’s Square. Exorcists long had tried “to cast out his demons,” Thavis says.

When Pope Francis met Angel, he laid hands “on the man’s head.” Angel writhed, emitted “a strange howling sound” and then slumped in his chair. The pope’s action may not have been a formal exorcism, but Thavis says several exorcists agreed he at least “recited a prayer of liberation from Satan.”

Exorcisms are the focus of one of the six chapters in Thavis’ book, which explores the continuing fascination in our times, when “Christianity is supposed to be the faith of reason,” with “the possibility of miracles, apparitions, encounters with the devil and other signs of the supernatural.”

Relics of the saints and reports of Marian apparitions are the focus of two of the book’s other compelling chapters. Vatican experts “estimate that in modern times the Catholic Church has investigated more than 1,000 alleged appearances of Mary,” Thavis reports.

Three other chapters are devoted to the shroud of Turin and its scientific study, the place of miracles in the sainthood process and dire prophecies concerning the church’s future and the end-times.

There is keen awareness in the Vatican of “the proliferation of visionaries and cultish movements that have attracted millions of Catholics, precisely by appealing to the thirst for hidden knowledge of God’s plan,” Thavis notes.

Undoubtedly, there is a degree of polarization within the church surrounding matters this book probes. Thavis’ discussion of relics of the saints casts light on the problem.

When relics are “routinely displayed these days,” people usually are “reminded that the Mass and the sacraments are more powerful tools than relics,” he writes. Nonetheless, he affirms, “the drawing power of a relic cannot be underestimated.”

Thavis long served as chief of the Catholic News Service Rome bureau. His book benefits greatly from his vast contacts with church leaders of all kinds in the Eternal City. In an earlier book titled “The Vatican Diaries” (Viking), he took readers behind the scenes to view the workings of the church in Rome.

“The Vatican Prophecies” is at pains to allow all interested parties to have their say about supernatural happenings. Thavis tells “the stories of recent miracles, apparitions and prophecies from the diverse perspectives of key players: the true believers, the in-house skeptics and the Vatican’s diligent investigators.”

What makes this book a page-turner that many will find difficult to put down are its countless stories about the work, convictions and religious experiences of real people.

There is the story of John Jackson, for example, a physicist “who for years worked on secret projects at the Air Force Weapons Laboratory in New Mexico.” Jackson’s later research on the shroud of Turin, believed by many to be Christ’s burial cloth, convinced him that the image it bears developed in the very process of Jesus’ resurrection.

Jackson proposes that the image appeared “when the shroud collapsed into and through a radiating body” that suddenly became “transparent to its physical surroundings,” Thavis explains.

“The Vatican Prophecies” examines a question that Thavis says “Catholic thinkers and officials are trying to answer” with mounting urgency: “In the 21st century, can the miraculous and the reasonable peacefully coexist?”

The Vatican has no Department of the Supernatural, Thavis points out. Yet, “one constant is that manifestations of the supernatural continue to simmer among the faithful, percolating up like hot spots on the global Catholic landscape.”

Gibson was the founding editor of Origins, Catholic News Service’s documentary service. He retired in 2007 after holding that post for 36 years.