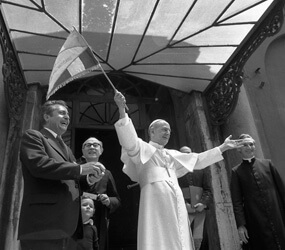 VATICAN CITY – No one would ever mistake St. Peter’s Square for Giants Stadium. But for centuries, the Vatican has hosted countless competitions and dozens of high-caliber athletes – most of them lay employees, some of them monsignors and popes.

Because so few people know about the sporty side of the Vatican and because much of it is oral history that needs to be preserved, one Vatican employee has decided to publish his research.

Roberto Calvigioni, department head of sound engineering at Vatican Radio, spoke with the Vatican newspaper, L’Osservatore Romano, this summer about the soccer champs, black belts, tennis aces and cycling stars who will appear in his book, which, he explained, is still in the works.

Pope John Paul II obviously stands out as the most athletic pope in memory: He was an avid skier, soccer player, swimmer and hiker.

Pope Pius XI loved mountaineering. He was the first to summit Switzerland’s highest mountain, Monte Rosa, from the eastern slope. He also climbed the Matterhorn and the route he scaled to Mont Blanc in July 1890 is named after him.

Pope Pius XII was passionate about sports and had no problem letting St. Peter’s Square be turned into a basketball court for a historic game of hoops Oct. 9, 1955.

Pope Pius XII loved cycling, Calvigioni said, and Tour de France winner Gino Bartali was particularly devoted to the pope, so much so that he gave the pontiff his yellow jersey when he won the tour in 1948.

When Pope Pius proclaimed Our Lady of Ghisallo the patron saint of bicycling in 1949, he created a brief moment of peace between two of Italy’s fiercest cycling rivals. He made Bartali and Fausto Coppi hold the flame together for the last segment of a torch relay from the Vatican to the Marian shrine in northern Italy.

Blessed Pope John XXIII was a huge fan of Bartali, too, and, according to Calvigioni, the pope once told the cyclist, “Listen Gino, I’m rather stocky. There are a lot of gardens here at the Vatican and I have a bicycle, but I don’t ride very well. If you could give me a hand ….”

Pope Paul VI flourished the starting flag for the start of the first stage of the Tour of Italy in 1974 from the Vatican’s St. Damasus courtyard. Pope John Paul II gave cyclists in the tour a special audience at the Vatican during the Jubilee year in 2000.

By 2007, the Vatican was making its name in cycling circles. Calvigioni said two Vatican gendarmes came in eighth and 50th in the 2007 world cycling championship, helping Team Vatican place ahead of Canada, Great Britain, Switzerland and Austria, but behind Italy, Spain, France and Belgium.

Many of the sports Vatican employees take part in, however, are just on an intramural, amateur level.

Tennis tourneys were very popular in the ‘70s, Calvigioni said, with the 1978 championship cup going to a music producer from Vatican Radio. Second place went to a Swiss Guard and third to Archbishop Faustino Sainz Munoz, who is now apostolic nuncio in Great Britain.

Soccer has been the lifeblood of Italian culture for centuries and Pope Leo X watched the first soccer game ever played inside the Vatican in a courtyard below the papal apartments Jan. 7, 1521.

But the first official, Vatican-organized games didn’t kick off until 1947.

That year’s final match between a team of workers from the pontifical villas and the Fabbrica di San Pietro – the office responsible for the basilica’s upkeep – apparently disintegrated into a game of “calcio storico fiorentino,” the Florentine version of nearly ruleless soccer that looks more like rugby and wrestling combined.

Today’s Vatican employee teams have monsignors from the Secretariat of State and various Roman Curia offices as well as the Swiss Guards, lay employees from Vatican Radio, the post office, the Vatican newspaper, the museums, the library and even the Sistine Chapel choir. All battle it out for the “Vatican Cup” and the “Super Cup” each year.

Calvigioni said by far the most talented athlete in the Vatican history books is Pio Gaddi.

Gaddi, who worked in the Vatican City governor’s office from 1959 to 1993, was one of four judo practitioners in Italy with a black belt and he took the bronze medal in judo at the European championships in Paris in 1952.

While he probably wasn’t able to use his exceptional fighting skills tackling the piles of documents in the Vatican archive office he was assigned to, the Holy See did take advantage of his martial arts abilities.

Gaddi conducted personal defense courses for the Swiss Guards, the Vatican gendarmes and the custodians watching over the artwork at the Vatican Museums.

So next time an attendant says not to take a flash photo of the Sistine Chapel, visitors had better listen or that camera might get thrown to the mat.