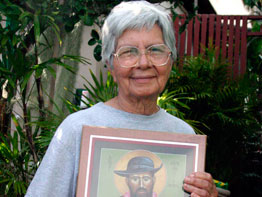 HONOLULU – Theological consultors to the Vatican Congregation for Saints’ Causes have ruled that the cancer cure of a Hawaiian woman was due to Blessed Damien de Veuster’s intercession, Honolulu Bishop Larry Silva announced April 29.

The decision represents a major step forward in Father Damien’s cause for canonization. The final actions required to declare the priest a saint are the endorsement of the congregation’s committee of cardinals and bishops and the approval of the pope.

Father Damien, the 19th-century Belgian missionary of the Congregation of the Sacred Hearts of Jesus and Mary who spent the final 16 years of his life caring for the Hansen’s disease patients on the Hawaiian Island of Molokai, was beatified in 1995 in Belgium by Pope John Paul II.

“I give thanks and praise to God for the news I received this morning!” Bishop Silva wrote in an e-mail message to diocesan personnel on the theologians’ decision.

In his announcement, Bishop Silva included the name of the Oahu woman, Audrey Toguchi, whose cancer disappeared a decade ago after she began prayers to Father Damien that included pilgrimages to Kalaupapa where the priest worked and died. It was the first time the diocese had made her name public.

Ms. Toguchi, in a May 1 interview with the Hawaii Catholic Herald, Honolulu diocesan newspaper, said that when she first learned she had cancer “I put everything in God’s hands.”

She decided to pray to Father Damien, who had given his own life in service to others. “Father Damien is not going to let me go,” she thought at the time.

The sainthood process generally requires two miracles, one for beatification and one for canonization.

An alleged miracle – usually a healing – must overcome two hurdles. First, medical experts must declare it dramatic and unexplainable. Next, theologians must determine that it was caused through the intercession of the candidate for sainthood.

In Father Damien’s case, the medical commission of the Vatican’s Congregation for Saints’ Causes ruled last October that the healing was “unexplainable according to available medical knowledge.” In this latest judgment, the theological consultors determined that the cure was attributable to Father Damien.

The cure in question involved the disappearance of cancer, without treatment, from Ms. Toguchi’s lungs in 1999. The case was documented in an article about “complete spontaneous regression of cancer” published by Dr. Walter Y.M. Chang, in the October 2000 issue of the Hawaii Medical Journal.

According to the article, three malignant lung tumors were discovered by X-ray in September 1998. The cancer was a reappearance of matching malignancies surgically removed earlier from other parts of the body.

Upon learning of her condition, Ms. Toguchi began praying to Father Damien and visiting Kalaupapa.

Before therapy could be applied, an X-ray a month later showed that the tumors had decreased in size.

Monthly X-rays revealed further shrinkage until scans in May and October 1999 could find no sign of the cancer. The doctor’s report stated that the “lung metastases disappeared with no therapy at all.”

The Diocese of Honolulu in 2003 convened a tribunal to investigate the miracle. The month-long process involved seven meetings and interviews with six medical doctors, the former cancer patient, her husband and sister, and two priests who had counseled the patient. Of the doctors, most of whom were not Catholic, five were connected with the care of the patient and one was independent.

The tribunal’s findings were formally opened at the Congregation for Saints’ Causes Sept. 11, 2003.

The ensuing process wasn’t all smooth sailing. The congregation asked the Honolulu tribunal to reconvene in 2005 to clarify parts of its original report. And last November, an official at the congregation quietly visited Hawaii for further examination of the case.