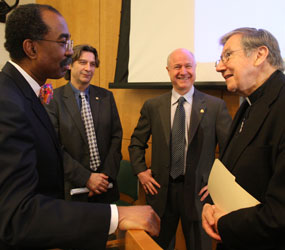 Leaders in the scientific and faith communities were optimistic that a new international initiative focused on intestinal stem cell research could yield significant medical advances – without fanning the ethical controversies that surround embryonic stem cell research.

Dr. Alessio Fasano, a UM professor of pediatrics, medicine and physiology and director of the Mucosal Biology Research Center, told The Catholic Review he hopes the consortium research will lead to real treatments for gastrointestinal conditions such as celiac disease and ulcerative colitis.

If researchers are able to induce intestinal stem cells to transform into different types of cells, Dr. Fasano said, a wide variety of other conditions might also be treated.

“Why do embryonic stem-cell research if we have an alternative that works as good – with advantages,” said Dr. Fasano, coordinator of the consortium and director of the Center for Celiac Research at the University of Maryland School of Medicine. “We put the entire scientific and social community on the same page and that’s the end of the story.”

Dr. Fasano noted that intestinal stem cells can be easily harvested. Patients receiving treatments using their own stem cells would be less at risk of rejection or a reaction to the transplant, he said.

“We are very supporting of adult stem cell research,” he said, “and we feel that this is an area that has great promise.”

Bishop Madden said he was pleased to learn that Pope Benedict XVI knows about the partnership and is “very enthusiastic” about it. Cardinal Renato Martino, retired head of the Pontifical Council for Justice and Peace, was involved in discussions surrounding the initiative’s launch.

Dr. Curt Civin, professor of pediatrics and UM director of the Center for Stem Cell Biology and Regenerative Medicine, said he believes the initiative will “take the steam out” of the stem-cell debates.

The oncologist noted that intestinal research could help in the treatment of cancers. If intestinal stem cells could be used to lessen the impact of chemotherapy, higher doses of chemotherapy could be given – which might lead to more cures, he said.

Dr. Fasano said he did not know how much financial support will be committed by the Vatican, nor could he specify when research will begin. He believes, however, that the “complicated part” of putting the team together has already been accomplished.