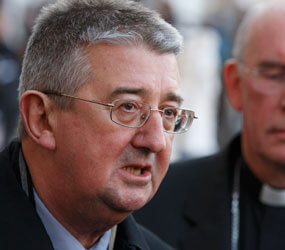 VATICAN CITY – Pope Benedict XVI shares “the outrage, betrayal and shame” felt by Irish Catholics over cases of clerical sexual abuse and the way abuse claims were handled by church leaders, and he plans to write a special pastoral letter to the Catholics of Ireland, the Vatican said.

The letter “will clearly indicate the initiatives that are to be taken in response to the situation,” said a statement issued by the Vatican Dec. 11. The statement was released after the pope and top Vatican officials spent 90 minutes meeting with Cardinal Sean Brady of Armagh, Northern Ireland, president of the Irish bishops’ conference, and Archbishop Diarmuid Martin of Dublin.

Cardinal Brady said the pope’s letter, which is expected early in January, will outline several initiatives, including public services of repentance for Irish bishops and priests.

“I asked him, in my opening remarks, to teach us, to help us be better shepherds of the people, to lead us on the way of repentance and so, therefore, there will be suggestions about celebrations of lament and repentance involving, first of all, us bishops and priests,” the cardinal told reporters.

Calling a papal pastoral letter to one nation’s Catholics “quite a significant document,” Archbishop Martin said it would be the beginning of a whole process aimed at “a very significant reorganization of the church in Ireland.”

“The climate in the church,” which allowed abusers to go unpunished, will only change once there is a renewal, a willingness to publicly accept responsibility for one’s actions and greater involvement by laypeople in all areas of church life, the archbishop said.

Jesuit Father Federico Lombardi, the Vatican spokesman, said the statement summarizing the meeting was approved by Pope Benedict and “obviously reflects his style and tone” in discussing revelations about clerical sex abuse.

Pope Benedict, the statement said, “was deeply disturbed and distressed” by the contents of a report by an independent Commission of Investigation, headed by Judge Yvonne Murphy, which looked at the handling of some 325 abuse claims in the Archdiocese of Dublin in the years 1975-2004.

The report concluded that during those years, rather than being concerned about the victims, Catholic leaders were more interested in “the maintenance of secrecy, the avoidance of scandal, the protection of the reputation of the church and the preservation of its assets.”

Archbishop Martin said it was obvious during the meeting that the pope was deeply ashamed by the report’s depiction of clerical sexual abuse of children and the lack of action on the part of church leaders.

“I think anybody who has read that report, no matter how much they knew about the problems in the church in Dublin, in Ireland or anywhere in the world, anybody with any sense of decency would be ashamed. And he (the pope) said it himself,” the archbishop said.

Describing acts of clerical sexual abuse as “heinous crimes,” the statement said Pope Benedict asked Catholics to join him in praying for the victims.

The pope wanted “once more to express his profound regret at the actions of some members of the clergy who have betrayed their solemn promises to God, as well as the trust placed in them by the victims and their families, and by society at large,” the statement said.

“The Holy Father shares the outrage, betrayal and shame felt by so many of the faithful in Ireland, and he is united with them in prayer at this difficult time in the life of the church,” it said.

The Vatican “takes very seriously the central issues” raised by the so-called Murphy Report, including the report’s “questions concerning the governance of local church leaders with ultimate responsibility for the pastoral care of children,” the statement said.

Father Lombardi said Pope Benedict “does not want this swept under the carpet,” but wants the church to deal with the problem and, in the letter he will write, will indicate ways that could be done.

The Jesuit said the pope’s letter would not be “just a letter of consolation or regret,” but would try to help the church in Ireland move forward while ensuring that such a betrayal of its mission would never occur again.

The Vatican statement said Pope Benedict “assures all concerned that the church will continue to follow this grave matter with the closest attention in order to understand better how these shameful events came to pass and how best to develop effective and secure strategies to prevent any recurrence.”

Father Lombardi declined to discuss the possible resignation of any Irish bishop. He said the Vatican has a specific process for handling bishops’ resignations and that it was not part of the Dec. 11 meeting.

Irish news agencies had been reporting that Bishop Donal Murray of Limerick, a former auxiliary bishop of Dublin and the only still-active bishop listed in the Murphy Report, had traveled to Rome earlier in the week to meet with Vatican officials.

The press reports said Bishop Murray was expected to resign in the wake of the report’s criticism of his “inexcusable” handling of an investigation of a pedophile priest.

Cardinal Brady said Bishop Murray had met recently with officials of the Congregation for Bishops “and we await further developments.”

Both Cardinal Brady and Archbishop Martin said it was clear that the pope and all the Vatican officials present at the meeting had been following very closely the situation in Ireland and the sex abuse scandal in other countries.

Father Lombardi said the top five officials of the Vatican Secretariat of State participated in the meeting: Cardinal Tarcisio Bertone, secretary of state; Archbishop Dominique Mamberti, secretary for relations with states; Archbishop Fernando Filoni, who is in charge of the general affairs section; Monsignor Ettore Balestrero, undersecretary for relations with states; and U.S. Monsignor Peter B. Wells, assessor for general affairs.