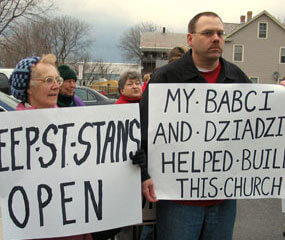 WASHINGTON – In mixed rulings on parishioners’ appeals of parish closings in three U.S. dioceses, the Vatican Congregation for Clergy upheld parish mergers, but in some cases said the church buildings that were closed must be reopened and “used in some manner as determined by the bishop.”

The congregation’s rulings, affecting churches in the dioceses of Springfield, Mass., Buffalo, N.Y., and Allentown, Pa., were handed down in December and January but only came to light in recent weeks.

In the Springfield Diocese, the results of church closing appeals were publicized by members of several parishes Feb. 15. A diocesan statement released a day later said Cardinal Mauro Piacenza, prefect of the congregation, apologized to Springfield Bishop Timothy A. McDonnell for “having failed to provide the diocese with these decisions in advance of their public release.”

Five parishes in the western Massachusetts diocese are involved in the ruling: St. Stanislaus Kostka in Adams; Assumption of the Blessed Virgin Mary, St. George and St. Patrick, all in Chicopee; and Our Lady of Hope in Springfield.

The Springfield diocesan statement said the Vatican congregation upheld the merging of Our Lady of Hope with another Springfield parish to create the new Mary, Mother of Hope. It also upheld merging Assumption in Chicopee with Holy Name of Jesus there, although Assumption Church has been reopened temporarily for worship while church officials investigate “structural concerns” at Holy Name Church, the diocese said.

However, in the case of those three churches, “the congregation has indicated that, in its judgment, sufficiently grave reason was not provided to close each of these church buildings and that they should be used in some manner as determined by the bishop,” the diocesan statement said. But in each instance, it emphasized, the parish “is not being re-established” and “any permitted use of the building will not be the same as when it was a parish church.”

Parishioners have a 24-hour-a-day vigil at St. Stanislaus Kostka, a historic Polish church, since the church was officially closed in December 2008 as part of a diocesanwide pastoral planning initiative to address declining parish membership and a projected decline in the number of priests.

For that reason, the diocese said, Bishop McDonnell “is seeking immediate clarification from the Vatican as well as through canon lawyers.”

“We’re seeing a change in Vatican policy, not in suppression of parishes, but in closing of churches,” said Peter Borre, who as leader of the Council of Parishes helped the parishioners file their appeals to the Vatican. He made the comments to a Framingham, Mass., newspaper.

He said he hoped Bishop McDonnell would “listen carefully to Rome and perhaps negotiate with these three parishioner groups on the reopening of these beautiful churches.”

In the Diocese of Buffalo, the Congregation for Clergy upheld the decision to merge St. Adalbert Parish into St. John Kanty Parish.

On July 1, 2007, Bishop Edward U. Kmiec announced St. Adalbert would merge with St. John Kanty and that St. Adalbert Church would no longer be used. However, because of the heritage of the parish, the bishop agreed to designate the church an oratory and it will continue as a place of worship.

The merger is effective March 7. St. Adalbert Church will become an oratory of St. John Kanty Parish. As a general term, oratory signifies a place of prayer, but technically it means a structure other than a parish church, set aside by ecclesiastical authority for prayer and the celebration of Mass.

“I know that this decision will be disappointing for you, but I have every confidence that the depth of your faith will give you the strength to accept this decision and enter fully into the life of St. John Kanty Parish, or another parish of your choice,” Bishop Kmiec said in a letter read to St. Adalbert parishioners the weekend of Jan. 29-30.

“I would like to express my gratitude to you for the respect and courtesy you have shown to me throughout the appeal process. I understand the appeal was prompted by the love you have for your parish community and for the church building itself,” he added.

The diocese said Bishop Kmiec will allow one Sunday Mass to be celebrated in the oratory between March 6 and Sept. 18.

In the Allentown Diocese, there were 14 appeals pending and the Vatican congregation upheld both suppression of some parishes and the closure of churches, and in others upheld the suppression but said the church buildings should not have been closed.

Spokesman Mark Kerr told Catholic News Service Feb. 16 that the diocese needed clarification of the Vatican congregation’s decision on the appeals before it could issue a comment.