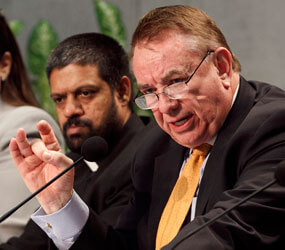 VATICAN CITY – New biotechnologies raise questions in the fields of medicine, economics, ethics and philosophy, and the Vatican plans to look at all of them during a three-day conference devoted to adult stem-cell research, officials said.

The Pontifical Council for Culture partnered with NeoStem, Inc., a U.S. company researching and marketing adult stem-cell therapies, to sponsor the Nov. 9-11 international conference, “Adult Stem Cells: Science and the Future of Man and Culture.”

Cardinal Gianfranco Ravasi, council president, said that in the modern field of research all sorts of potential interests intertwine, including health care and economic interests. In searching for a partner to promote research and discussion about adult stem cells, the Vatican sought a collaborator whose ethical practices fit in with the Vatican’s own views, he said.

Father Tomasz Trafny, who works with the cardinal on issues of religion and science, said, “We struggled to find the right partner,” and while NeoStem is a business, “it is one that has a very clear ethical statement” that it will not destroy human embryos to obtain stem cells.

Stem cells have the potential to develop into many different types of cells and are used primarily to regenerate damaged tissue or systems in the body. NeoStem executives said adult stem cells are being used to treat leukemia and other cancers, heart disease and autoimmune disorders.

At a Vatican news conference Nov. 8 to discuss the stem-cell meeting, Cardinal Ravasi and Father Trafny were joined by Dr. Robin L. Smith, CEO of NeoStem, and Tommy G. Thompson, the former U.S. secretary of Health and Human Services and a Republican candidate for the Senate from Wisconsin.

Thompson, a Catholic, told reporters the discovery of stem cells – and of the ability to obtain them from embryos – created “a great deal of confusion, a lot of heartache, some promise and a lot of discussion.”

Fortunately, he said, science already has proven the usefulness of adult stem cells, which can cure human beings without having to destroy a human embryo.

“I just don’t believe that man can engineer something superior to what the good Lord has already given us – our bodies. That’s what I love about this science and this conference; it’s about adult stem cells,” he said. Stem-cell therapy relies on “the divine wisdom inside of us to supercharge our bodies and go down that road to try to wipe away disease.”

Thompson was invited to the conference to speak about the political implications of medical research, especially regarding stem cells. He said politically and economically it makes sense to support adult stem-cell research.

For example, the United States spends about $200 billion a year managing diabetes, which affects one out of eight Americans, he said.

“We’re wasting money managing a disease instead of finding a cure for it,” he said.

Cardinal Ravasi said researchers and politicians won’t be the only ones at the Vatican conference. They will be joined by physicians, theologians, philosophers and patients who have been treated with adult stem cells.

The Catholic approach to the sick and suffering always has had a multidisciplinary approach – usually medical care and spiritual support, he said. But when dealing with technologies “on the frontiers” of research, the ethical and cultural implications also should be discussed, he said.

Raymond Flynn, the former U.S. ambassador to the Vatican and a career politician, signed up to attend the conference for a much more personal reason.

He told Catholic News Service he’s hoping to find some answers, or at least people who may be able to help him find answers, to help his 5-year-old grandson Braeden, who was has been diagnosed with a rare neurological disorder.

“He walks three steps and falls and cuts his head. He can’t talk,” Flynn said. “I’ve kind of dropped everything to try to focus on him.”

“When the Catholic Church took a strong stand against embryonic stem-cell research, it closed the door on one kind of research – and I agree, you can’t take a life to give life. But people think the church is against all stem-cell research, and that’s not true,” he said.

“This conference will open the door to understanding the possibilities of adult stem-cell research. Will it help people like Braeden? I don’t know. But I’m studying, talking to people and not giving up,” Flynn said.