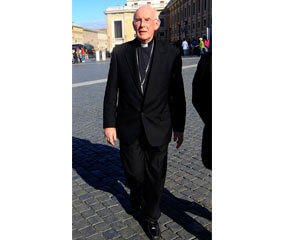 VATICAN CITY – The apostolic visitation of the Catholic Church in Ireland will pay special attention to victims of clerical sex abuse as part of its overall goal of helping the local church respond adequately to past cases of abuse and to perfect preventative measures, according to the Vatican.

“The visitators will give particular attention to victims of abuse and their families, but will also meet with and listen to a variety of people, including ecclesiastical authorities, lay faithful and those involved with the crucial work of safeguarding children,” said a statement released by the Vatican press office Oct. 6.

Vatican officials held a series of preparatory and planning meetings with the apostolic visitators named by Pope Benedict XVI and with the Irish archbishops whose dioceses will be the first to be investigated.

The Irish church leaders – Cardinal Sean Brady of Armagh, Northern Ireland; and Archbishops Diarmuid Martin of Dublin, Dermot Clifford of Cashel and Emly, and Michael Neary of Tuam – met Oct. 6 with the prelates conducting the visitations and with officials from the Congregation for Bishops and the Vatican Secretariat of State.

The meeting, which was “marked by fraternal warmth and mutual collaboration, summarized the discussions from the previous day and focused on the organization of the apostolic visitation and the archdioceses involved,” the Vatican statement said.

“Mindful of the tragic abuse of children that has taken place in Ireland, the participants discussed the particular aspects of this important visitation,” the statement said.

Pope Benedict announced plans for a visitation in his March letter to Catholics in Ireland, promising to root out the problem that the church had ignored in the past.

Irish bishops met with the pope in February after an independent study known as the Murphy Report said the church operated with a “culture of secrecy” in dealing with charges of abuse by victims and their families in the Archdiocese of Dublin from 1975 to 2004.

Other reports showed the problem was widespread throughout other dioceses and often involved the complicity of Irish authorities.

While the diocesan visitation initially will involve only the four archdioceses, other dioceses and religious orders will be visited at a later stage.

Pope Benedict also named Archbishop Timothy M. Dolan of New York, former rector of the U.S. seminary in Rome, to lead a visitation of Irish seminaries, including the Pontifical Irish College in Rome.

The pope named two priests and two religious women to conduct a visitation of Irish religious orders. Archbishop-designate Joseph W. Tobin, secretary of the Vatican congregation for religious, and Jesuit Father Gero McLoughlin, promoter of Ignatian spirituality for the Jesuits’ British province, will visit men’s religious orders. U.S. Sister Sharon Holland, a member of the Servants of the Immaculate Heart of Mary and former Vatican official, and Irish Sister Mairin McDonagh, a member of the Religious of Jesus and Mary, will conduct the visitation of the women’s communities.