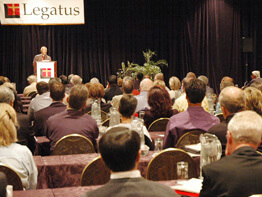 A Vatican official urged a group of Catholic business leaders meeting in Colorado Springs to vigorously defend marriage and family life which he said are under attack by modern society.

“The dissolution of marriage and family is like the introduction of a cancerous virus,” said Nigerian Cardinal Francis Arinze, head of the Congregation for Divine Worship and the Sacraments.

“Collapse will only be a matter of time. Can we afford to stand by and look in helpless silence?” he asked participants during the Legatus international fall summit Sept. 21.

The cardinal named several forces that debase marriage and family, including sexual relations between unmarried people, pornography and prostitution. He also pointed out that Scripture condemns homosexual acts and said divorce ruins children.

Additionally, Cardinal Arinze denounced sterilization and contraception as attacks on the origin of human life and called abortion and infanticide “unspeakable crimes.”

“It’s tragic that some people see babies as a problem rather than a blessing,” he said. “When a culture views dogs and cats as nice but children as troublesome, we are in trouble.”

The cardinal deconstructed moral relativism and the argument that what is right for one person doesn’t apply to someone else. He especially took to task those who use the phrase “I’m personally not in favor of it” to justify allowing others to partake in evils such as abortion.

“I’m personally not in favor in killing the whole lot of you in Congress, but since there are some who, according to free choice, want to shoot all of you, I let them free,” said Cardinal Arinze, providing an illustration of what he deemed a useless choice of words. “It’s not a good argument.”
He said God’s role in the world has to be taken into account when deciding on morals and laws and pointed to the Ten Commandments as being universally accepted as moral truths.

“When objective moral truth is denied, we are on a slippery slope,” he told the group of Catholic business executives.

The cardinal also attacked the mass media for what he described as an irresponsible use of influential tools. Instead of being used as a force for good, Cardinal Arinze said mass media outlets are often used to promulgate evil, whether wittingly or unwittingly.

He said Christians have to “be ready to stand against the tide in cultures that regard the elderly as an encumbrance. There is room for all in families: children, parents, grandparents; young, old, all.”
“Everyone in the church … has a role toward sustaining the divine gifts of marriage and family,” he told the assembly.

He said the main contribution laypeople can make toward strengthening marriage and family life is through their personal example as children, spouses and parents.

“They are to give good witness to Christ by model lives,” he said.