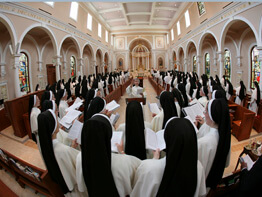 NASHVILLE, Tenn. – Cardinal Tarcisio Bertone, the second highest ranking official at the Vatican, pointed to the Dominican Sisters of St. Cecilia in Nashville as an example of the vitality of the Catholic Church in the United States.

Cardinal Bertone, who is secretary of state, was in Nashville to attend the 125th annual national convention of the Knights of Columbus. He took time out to celebrate Mass for the Dominican Sisters at their motherhouse Aug. 8, the feast of St. Dominic.

Mother Ann Marie Karlovic said the sisters were “overwhelmed and grateful” that the cardinal, who is responsible for overseeing the work of the Roman Curia and is Pope Benedict XVI’s closest collaborator, asked to visit the Dominicans while he was in Nashville.

The sisters were waiting on the grounds of the motherhouse when the cardinal and his party arrived in two limousines and a sport utility vehicle. The sisters greeted him with a song.

The cardinal celebrated Mass in the sisters’ new chapel, which was part of a $45 million renovation and expansion of the motherhouse completed less than two years ago.

All 228 sisters in the congregation, the highest number in its history, were on hand for the Mass on the feast day of the order’s founder, Mother Ann Marie said. The sisters and a sprinkling of special guests filled the chapel, and the congregation’s choir and orchestra provided the music.

At the conclusion of the Mass, Cardinal Bertone said the spirit of St. Cecilia is embodied in the congregation.

At a press briefing later that day, Cardinal Bertone responded to a question about his opinion of the state of the church in the United States by pointing to the activity and vitality of both the Knights of Columbus and the Dominicans.

He noted that during his visit with the Dominicans he met several sisters who recently celebrated their 75th anniversary of religious life and met many young sisters as well. He made a point of telling the reporters to write down that the average age of the Dominican Sisters is 33, a contrast to many religious orders, both in the United States and Europe, whose membership is aging.

“This presents a beautiful face of the church here,” Cardinal Bertone said of the Dominicans.
“There seems to be a real surge in vocations now,” said Mother Ann Marie. “God always calls us. Sometimes we’re too busy and our world is too loud and we can’t hear.”

She said everyone has a vocation, whether it’s to religious life or as a layperson. “Everyone needs to listen to God,” Mother Ann Marie said, and she urged families to provide “an atmosphere for children to listen and hear what God is calling them to do.”

Before arriving at the motherhouse, Cardinal Bertone stopped at Assumption Church, one of the oldest churches in Nashville, dedicated in 1859.

Assumption also was the parish where the late Cardinal Samuel Stritch grew up. Cardinal Stritch, ordained as a priest of the Diocese of Nashville, was the archbishop of Chicago when he died in 1958.
During the visit, Cardinal Bertone presented Father Bernard Niedergeses, Assumption’s pastor, with a papal medallion.