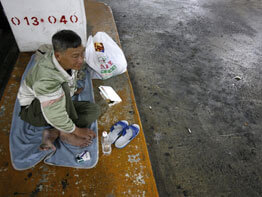 VATICAN CITY – Homelessness is “a global pandemic” that demands a Christian response and government intervention, a Vatican official said during the Vatican’s first international conference addressing the pastoral needs of the homeless.

Archbishop Agostino Marchetto, secretary of the Pontifical Council for Migrants and Travelers, said more than one billion people are homeless or lack adequate shelter, and that number is on the rise.
Some 50,000 people, mostly women and children, die every day because they lack decent shelter, clean water and proper sanitation, he said in a Nov. 26 address.

In the United States alone, 3.5 million people are estimated to be homeless with up to 1.4 million of them children, he said.

He said these “figures should startle, if not shock us, and they should goad us to greater pastoral action” and advocacy work aimed at tackling the root causes of homelessness and poverty.

The archbishop was one of about 50 participants from all over the world who met at the Vatican Nov. 26-27 to share ways the church could continue to provide basic material assistance for people on the street and find new ways that promote their dignity and value.

But the increasing number of people without adequate shelter and care is a sign that parts of the world “have become selectively amnesiac, especially of an imperfect, unequal and unjust social order,” he said.

The “grave situation” of inadequate housing for so many people is “continually casting a shadow over the world, the church and society,” said Archbishop Marchetto.

“While the responsibility to provide just and suitable housing for all belongs properly to the state, it has always been the duty of the Christian not to deny the plight of those who are homeless and have fallen to the margins of society,” he said.

Christians are called to care for and “walk side by side with those who are homeless not only in their need for shelter, but in their effort for a more dignified way of living.”

The pastoral and spiritual needs of homeless individuals are vast and varied, he said, because homelessness does not just mean a lack of permanent shelter; “it is the collapse of a world, of security, personal relationships and of dignity. It is the loss of the ability to lead a life truly human.”

Archbishop Marchetto said the church must foster “communities of welcome,” which are “ecclesial communities willing not only to receive the homeless but also to accompany them with commitment.”
Each homeless person needs to be seen as an individual with specific needs and “not a problem to be sent elsewhere,” he said.

He said a careful balance must be struck between offering help and respecting the person’s freedom, including the freedom to refuse aid and pastoral care.

For some people, returning to society or reconciling with their family “may not always be easy, possible or desirable,” he said, so it is important that pastoral workers truly listen to the person’s concerns and not insist on their own agenda.

The faithful must also address the causes of homelessness and poverty, he said, by being advocates on such public issues as “housing policy, employment, welfare, health care and state support for the homeless.”

Cardinal Renato Martino, head of the migrants council, reminded participants that when performing charity or working for change “at the heart of all our activity must be love.”

Referring to Pope Benedict XVI’s first encyclical, “Deus Caritas Est” (“God Is Love”), released in 2006, the cardinal said, “It is not enough to give temporal goods, we must be able to be personally present in all that we do.”

Cardinal Martino said the church’s loving, pastoral approach to ministering could serve as “a clear witness and example to governments and communities, challenging them to recognize the dignity of each human person … which can often be obscured by the problem of homelessness.”