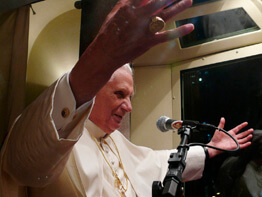 SAO PAULO, Brazil – Pope Benedict XVI’s comments on excommunication for pro-abortion Catholic politicians touched on huge and sensitive issues – so sensitive that the Vatican issued a toned-down version of his remarks the following day.

Speaking with journalists on the plane taking him to Brazil May 9, the pope left the impression that he agreed with those invoking excommunication for Catholic legislators in Mexico City who had voted in April to legalize abortion.

When reporters pressed the pope on whether he supported the excommunication of the Mexican deputies, he answered: “Yes, this excommunication was not something arbitrary, but is foreseen by the Code (of Canon Law). It is simply part of church law that the killing of an innocent baby is incompatible with being in communion with the body of Christ.”

Referring to Mexican bishops, the pope continued: “Therefore, they did not do anything new, surprising or arbitrary. They only underlined publicly what is foreseen in (canon) law, a law based on the church’s doctrine and faith, on our appreciation for life and for human individuality from the first moment.”
On May 10, the Vatican press office released the official transcript of the pope’s 25-minute session with reporters. The pope’s opening “yes” to the direct question about excommunication had disappeared, and so had the references to Mexican bishops.

The tweaked version of the pope’s remarks began: “Excommunication is not something arbitrary, but is foreseen by the Code (of Canon Law.) Therefore, it is simply part of church law that the killing of an innocent baby is incompatible with going to Communion, in which one receives the body of Christ.”

In the rest of the edited version, some of the pope’s verbs were changed to make his remarks more generic.

Asked about the changes, Jesuit Father Federico Lombardi, the Vatican spokesman, told reporters May 10 that it was routine for the Vatican Secretariat of State to review the pope’s extemporaneous remarks and clean them up a little for publication.

That the pope’s comments had potential for controversy was apparent immediately after he made them. Father Lombardi quickly circulated among reporters on the plane and told them that the pope was not announcing a new policy on Catholic politicians.

“And if the bishops haven’t excommunicated anyone, it’s not that the pope wants to do so,” Father Lombardi said.

Later May 9, after consulting with the pope, Father Lombardi said the pontiff was only reiterating the teaching that Catholic legislators who promote initiatives like the legalization of abortion exclude themselves from the conditions needed to participate fully in the Eucharist.

But for many media, those distinctions meant less than the pope’s apparent “yes” to the penalty of excommunication for Catholic politicians. The next day’s banner headline in one of Brazil’s leading newspapers, Folha de Sao Paulo, read simply: “The pope supports the excommunication of pro-abortion politicians.”

In Brazil and in several Latin America countries, there are increasing pressures to legalize abortion. Its adoption in Mexico City, which now allows abortion for the first 12 weeks of pregnancy, was seen by church leaders as a major defeat.

Some of the church’s statements following the vote in Mexico City have appeared inconsistent, however.

Carlos Villa Roiz, a spokesman for Mexico City Cardinal Norberto Rivera Carrera, told Catholic News Service May 9 that the Mexican church did not yet have an official position on the matter.

Immediately before the law’s approval April 24, local press quoted a Mexico City archdiocesan statement that said when the law took effect “any baptized assembly members will automatically be excommunicated and therefore be excluded from the Catholic Church.”

However, Cardinal Rivera backed off this stance May 6, saying that excommunication was not necessary.

“The only official position of the archdiocese is the one the cardinal announced on Sunday,” Villa said. “During Mass, he said that he hadn’t considered excommunicating anyone.”

Villa added that Mexican clergy were still debating whether the lawmakers had been excommunicated “latae sententiae,” meaning excommunication may have been automatic following their vote, with no need for a formal church declaration.

He said Mexican church officials would be ready to follow any orders from the pope.

“When Rome speaks, the discussion is over,” Villa said. “Even if Cardinal Rivera hasn’t excommunicated them, the pope is making it understood that the legislators have committed a serious, mortal sin.”

Politicians who supported the abortion bill have downplayed the excommunication discussions.

Mexico City Mayor Marcelo Ebrard, a member of the Democratic Revolution Party, told reporters May 9 that he “hadn’t lost any sleep” over the possibility of being excommunicated.

“I am going to fulfill my duties,” he said. “Above the law, there is nothing more important.”

The issue of politicians and Communion has ramifications beyond Mexico.
During the 2004 U.S. presidential election campaign, about 10 to 12 of the approximately 190 diocesan bishops spoke out in favor of denying
Communion to politicians who favored abortion. The bishops are scheduled to discuss the issue again this November when they vote on a new statement on “Faithful Citizenship.”

– – –
Contributing to this story was Jonathan Roeder in Mexico City.