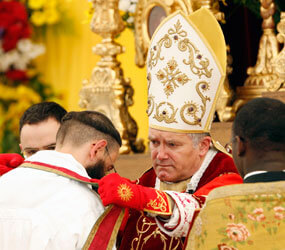 VATICAN CITY – The Vatican has given the traditionalist Society of St. Pius X a formal “doctrinal preamble” listing several principles they must agree with in order to move toward full reconciliation with church.

U.S. Cardinal William J. Levada, prefect of the Congregation for the Doctrine of the Faith, gave the statement to Bishop Bernard Fellay, head of the society, Sept. 14 during a meeting at the Vatican that lasted more than two hours.

Although the Vatican did not give the society a deadline, in order to move toward full reconciliation, leaders are expected to study and sign the preamble “within a few months,” said Jesuit Father Federico Lombardi, Vatican spokesman.

The cardinal and bishop also discussed possible “elements of a canonical solution” for the society after “the eventual and hoped-for reconciliation,” said a statement issued by the Vatican after the meeting.

Father Lombardi said, “Today the most likely solution would be a personal prelature,” which is a church jurisdiction without geographical boundaries designed to carry out particular pastoral initiatives. It is headed by a prelate, who is appointed by the pope; currently the church’s only personal prelature is Opus Dei.

The document given to Bishop Fellay to sign “states some doctrinal principles and criteria for the interpretation of Catholic doctrine necessary to guarantee fidelity” to the formal teaching of the church, said a statement issued by the Vatican after the meeting.

At the same time, the statement said, the preamble leaves room for “legitimate discussion” about “individual expressions or formulations present in the documents of the Second Vatican Council and the successive magisterium” of the popes who came after the council.

Father Lombardi would not respond to questions about specific church teachings and developments listed in the preamble, but said church tradition always has held there are varying degrees of church teaching; some require an absolute assent while others are open to interpretation.

In a statement on the U.S. district website Sept. 14, Bishop Fellay said the meeting was conducted “with great courtesy and with equally great candor.” He said he would study the document given him by the Vatican and “consult with those who are chiefly responsible for the Society of St. Pius X, because in such an important matter I have promised my confreres not to make a decision without consulting them first.”

The Vatican talks with the society were launched in late 2009 in an effort by Pope Benedict XVI to repair a 21-year break. The pope said that full communion for the group’s members would depend on “true recognition of the magisterium and the authority of the pope and of the Second Vatican Council.”

The Vatican statement did not mention any of the specific areas where Bishop Fellay’s group has said the Catholic Church and the popes since the Second Vatican Council had broken with true Catholic tradition. They object to the reform of the Mass, to much of the church’s work in ecumenical and interreligious dialogue, and to the council’s stand on religious freedom.

Bishop Fellay had said his society went into the talks aiming to show the contradictions between the church’s traditional teachings and its practices since Vatican II. That is “the only goal that we are pursuing,” he had said, adding that the dialogue with the Vatican is not a search for compromise but “a question of faith.”

In addition to the society’s rejection of many Vatican II teachings, members also objected to the beatification of Pope John Paul II and, particularly, to Pope Benedict’s convocation of another interreligious meeting for peace in Assisi.

Pope Benedict cleared the way for reconciliation talks with the Society of St. Pius X in early 2009 when he lifted the excommunications of Bishop Fellay and three other society bishops ordained against papal orders in 1988. The Vatican said the dialogue was designed to restore “full communion” with members of the society, which was founded by the late Archbishop Marcel Lefebvre.

The Vatican said the talks were to focus on the concept of tradition, liturgical reform, interpretation of Vatican II in continuity with Catholic doctrinal tradition, church unity, ecumenism, the relationship between Christianity and non-Christian religions, and religious freedom.

The Vatican and the society appointed a commission to discuss the issues and members met eight times between October 2009 and April 2011, the Vatican said.

The meetings “reached the aim of clarifying the respective positions” of the two sides, it said.

Cardinal Levada’s meeting with Bishop Fellay “is an important step in this process,” which has moved from the work of a study commission to direct talks between the doctrinal congregation chief and the head of the society “with the obvious intent of arriving at positions and conclusions in this process of searching for reconciliation,” Father Lombardi said.

Announcing the September meeting, the superior of the society in Germany, Father Franz Schmidberger, said on the group’s website that Cardinal Levada and Bishop Fellay would discuss the results of the commission’s dialogues from the past two years, but also would focus on questions concerning the canonical status of the society and its members.

While the pope lifted the excommunication of the four bishops, he said that “until the doctrinal questions are clarified, the society has no canonical status in the church, and its ministers … do not legitimately exercise any ministry in the church.”

On its U.S. district website Sept. 6, the society published parts of an interview Bishop Fellay gave in June. In it, he said, contacts were ongoing, although “we have probably reached the end of a period of discussions. It is not yet totally clear. What is going to happen? What is going to be the result of this phase?”

“We cannot deceive ourselves: We are truly in a crisis of the church. It is certainly not over,” he said. “We work for the restoration of the church, but it may still last a decade or two. We need much courage and perseverance. Our situation might be solved tomorrow and it might be solved after tomorrow. Everything is in the hands of the good Lord. Let us simply remain faithful.”