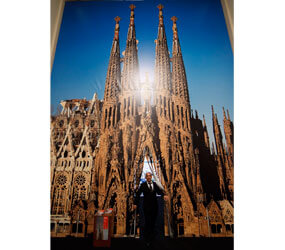 The Vatican exhibit “Gaudi, La Sagrada Familia of Barcelona. Art, Science and Spirituality,” explores how Gaudi, a Catholic whose beatification cause is under way, incorporated art, science and spirituality in the design of the Barcelona church.

The exhibit, which runs Nov. 24 to Jan 15, provides a glimpse into Gaudi’s masterpiece though images, models and virtual tours of the church. Construction of the church began in 1882 and is expected to be finished in 2025.

During a news conference Nov. 24, curator Daniel Giralt-Miracle thanked the Pontifical Council for Culture and the Holy See for hosting the exhibit and explained its purpose.

“We wanted to explain what is most essential about Gaudi in a single exhibition, to do this through his most outstanding work, La Sagrada Familia de Barcelona, and through the three main vertices that in my view shape his personality: art, science and spirituality,” he said.

Giralt-Miracle, who has studied the Catalan architect since the 1970s, said he hoped the exhibit will help visitors “understand Gaudi’s personality and his approach to his work.” He said Gaudi took his inspiration from the Scriptures, the liturgy and main characters in the Bible.

“Apart from the functionality of his architectural project, Gaudi also uses it to tell us the story of Jesus and to transmit the essential elements of the Christian message to us,” Giralt-Miracle said.

As visitors enter the dimly lit exhibit, they are introduced to a chronological timeline of both the life of Antoni Gaudi and the construction of La Sagrada Familia accompanied by a massive, aerial image of the church.

The art section of exhibit displays other works by Gaudi that contain physical and symbolic features similar to those used in La Sagrada Familia. Giralt-Miracle said the idea is “to immerse spectators in Gaudi’s aesthetic, regaling them with his colors, his forms and the wide range of artistic trades that he employed in his work.”

The section on science helps visitors understand the technical, mathematic and geometrical aspects Gaudi used both in his models and in the construction of the church. The architects continuing Gaudi’s work on La Sagrada Familia provided two models that represent the completed version of the church in 2025.

The last section of the exhibit examines Gaudi’s spiritual inspiration, symbolized in the architecture of the church. It features illustrations of the Passion Façade and stained-glass windows created by Gaudi’s successors using his instructions, as well liturgical objects and furniture from the church.

The exhibit ends with a short film featuring video clips from Pope Benedict XVI’s 2010 visit to La Sagrada Familia to dedicate the church and proclaim it a minor basilica.