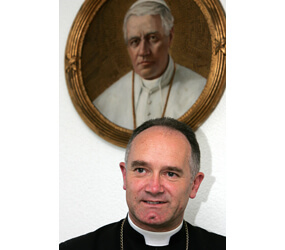 VATICAN CITY – The Vatican announced the start of a long-awaited dialogue aimed at repairing a 21-year break with a group of traditionalist Catholics.

The first encounter between the leaders of the Society of St. Pius X and Vatican experts will take place Oct. 26 at the Vatican, Jesuit Father Federico Lombardi, the Vatican spokesman, said Oct. 15.

The announcement came a few days after the head of the traditionalist society, Bishop Bernard Fellay, reiterated a list of objections to the Second Vatican Council and said he hoped the dialogue would help dispel “errors” in the church.

Pope Benedict XVI has named a commission under the authority of the Congregation for the Doctrine of the Faith to conduct the delicate dialogue with the society, saying the remaining problems with the society are mainly doctrinal in nature. The head of the commission is the doctrinal congregation prefect, U.S. Cardinal William J. Levada.

The Vatican said the initial talks would focus on the unresolved doctrinal issues, and that the contents of the meeting would remain “strictly private.” A statement will be issued at the end of the meeting, it said.

The pope cleared the way for reconciliation talks last January when he lifted the excommunications of four society bishops ordained against papal orders in 1988. The pope later said that full communion for the group’s members would depend on “true recognition of the magisterium and the authority of the pope and of the Second Vatican Council.”

In a recent interview with the African magazine Tradition, Bishop Fellay said the goal of the dialogue with the Vatican would be to clarify church teaching in recent years and “help dispel the errors or the severe ambiguities that have since been spread with full hands throughout the Catholic Church.”

Bishop Fellay said the modern church was in crisis, and that “the solution to the crisis is a return to the past.” He said the society’s main objections to Vatican II were its teachings on religious liberty, ecumenism and collegiality, but added that other problems included the influence of modern philosophy, liturgical novelties and a “worldly spirit” that “has run rampant throughout the church.”

He said the talks with the Vatican could take a long time, and that the “restoration of the church” may take a century.

The bishop praised Pope Benedict for emphasizing the importance of continuity in church practice and teaching. But he said the pope acts as if the changes introduced by Vatican II are not a break with the past, and that this presents “a very sensitive issue.”