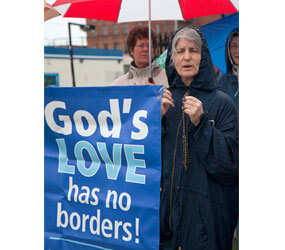 WASHINGTON – The current and former attorneys general of neighboring southwestern states used the images on their state quarters as an apt way of describing Utah’s and Arizona’s divergent paths on immigration legislation.

Utah’s quarter, explained Attorney General Mark Shurtleff, shows the placing of the Golden Spike in 1869, completing the Transcontinental Railroad. Shurtleff said the long-ago ceremony acknowledged the hard work of Irishmen, who worked from the East, and Chinese, who worked from the West. Both groups of immigrants were “hated and despised” at the time, he noted, and the gesture was intended to deflate some of the anti-immigrant rhetoric.

Arizona’s quarter, as former Arizona Attorney General Terry Goddard pointed out at the same April 26 migration conference, includes images of the Grand Canyon and a saguaro cactus. The two prominent features of Arizona are located on opposite sides of the state, and, Goddard pointed out, “are never seen together.”

It’s an appropriate metaphor for the differences in the states’ recent legislative efforts on immigration, Goddard joked. “Arizona is about the dichotomy and Utah is about joining together.”

That joining-together approach is what Shurtleff and others are trying to take to a national level.

Arizona’s S.B. 1070 has largely been caught up in court since it passed last year. Pending rulings on its constitutionality, two federal courts have blocked provisions that would have required law enforcement officers to verify the immigration status of anyone stopped; made it a crime for immigrants not to carry proof of their immigration status at all times; allowed police to make warrantless arrests over the suspicion of someone being in the country illegally; and criminalized the act of looking for work without the proper paperwork or hiring someone who lacks a work permit.

Goddard said the damage to Arizona’s economy and reputation are impossible to calculate, but tangible. He related anecdotes about lost convention business and commercial shipping with Mexico diverted from Arizona’s ports of entry to those in Texas.

Utah in March passed a less restrictive law that allows for police to inquire about the immigration status of people stopped for serious crimes and requires employers to verify eligibility to work. It also includes provisions for a state immigrant work permit that would make it possible for undocumented immigrants to pay fines and get authorization to work in Utah. Those parts would take effect in two years and likely will require a federal waiver from existing laws.

A year after 1070 passed, Shurtleff and Goddard anchored a panel on the role of states in immigration enforcement and policymaking during the eighth annual Immigration Law and Policy Conference, sponsored by the Migration Policy Institute, the Catholic Legal Immigration Network and Georgetown University Law Center.

Shurtleff said that last fall he began using the image of the Golden Spike – complete with a spray-painted railroad spike as a prop – to talk about the importance of seeking common goals for the state’s immigration debate. That helped lead to the creation in November of the Utah Compact, he said.

Based upon the Mayflower Compact, which set out common principles that would undergird the development of the society created by the passengers of the 17th-century ship, the Utah Compact set five principles to guide Utah’s discussion of immigration.

The principles call for:

– Rejection of “policies that unnecessarily separate families” and support for those that “support families and improve the health, education and well-being of all Utah children.”

– Acknowledgment of “the economic role immigrants play as workers and taxpayers” and reaffirmation of Utah’s “global reputation as a welcoming and business-friendly state.”

– “A humane approach” to the reality that “immigrants are integrated into communities across Utah.”

“In January, we were headed to an enforcement-only bill and toward repealing our in-state tuition (for undocumented students who have graduated from Utah high schools) law,” he said.

“What we ended up with isn’t perfect,” he continued, acknowledging that the laws may be challenged in court. But he believes the direction of legislation was changed by the work among community, law enforcement and business and religious leaders – particularly from the Church of Jesus Christ of Latter-day Saints, the state’s dominant faith – to create the Utah Compact as a starting point for debate.

Salt Lake City Bishop John C. Wester told Catholic News Service that while he believes the legislation passed in Utah is flawed – he fears the enforcement measures alone will take hold and the work permit provisions will be blocked – “the Utah Compact is a good document.”

Shurtleff is now heading an effort to recast the national conversation about immigration law and policy by creating an “America’s Compact,” modeled after the Utah declaration.

“What we do needs to be based on principles,” he said. “We will fail if all we hear is the shrill radio voices.”