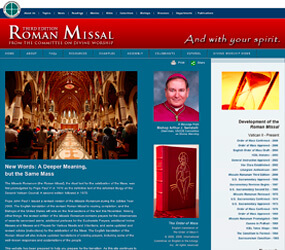 WASHINGTON – A new Web site launched Aug. 21 by the U.S. Conference of Catholic Bishops was produced to educate Catholics about the forthcoming English translation of the new Roman Missal, the book of prayers used for Mass.

The site, www.usccb.org/romanmissal, has background material on the process of development of liturgical texts, sample texts from the missal, a glossary of terms and answers to frequently asked questions.

Content will be added regularly over the next several months, according to an Aug. 21 news release from the USCCB.

The bishops’ Committee on Divine Worship hopes the site will be a central resource for those preparing to implement the new text, the release said.

In the years since the Second Vatican Council, “we have learned a lot about the use of the vernacular in the liturgy and the new texts reflect this new understanding,” said the committee’s chairman, Bishop Arthur J. Serratelli of Paterson, N.J., in a video that welcomes visitors to the site.

“The new texts are understandable, dignified and accurate,” he said. “They not only strive to make the meaning of the text accessible for the listener, but they also strive to unearth the biblical and theological richness of the Latin text.”

After more than five years of consultation, study and reflection, the U.S. bishops are expected to conclude their review and approval of the final portion of the translated texts at the end of this year. Final approval, or “recognitio,” of the text from the Vatican Congregation for Divine Worship and the Sacraments will be the last step before the publication of the texts for use in the liturgy.

Bishop Serratelli called the period between now and the final approval “a great opportunity” not only to learn about the changes and the revised texts, “but also to deepen our own understanding of the liturgy itself.” He said, “We encourage priests, deacons, religious, liturgical ministers (and) all the faithful to avail themselves of the information that we are making available.”

The new Latin edition of the Roman Missal was released at the Vatican in March 2002. Since 2003 the bishops of the English-speaking world have been preparing an English translation of the missal.

In June 2006, the U.S. bishops meeting in Los Angeles approved the first section of the missal translation that involves the penitential rite, Gloria, creed, eucharistic prayers, eucharistic acclamations, Our Father and other prayers and responses used daily. In 2008, the Vatican gave final approval of those texts.

In July of this year the USCCB announced that the bishops had approved four more liturgical texts – prefaces for the Mass for various occasions; votive Masses and Masses for the dead; solemn blessings for the end of Mass; and prayers over the people and eucharistic prayers for particular occasions, such as for evangelization or ordinations. The next step is Vatican approval.

The bishops’ vote on the texts was completed in mail-in ballots nearly a month after their spring meeting in San Antonio.

Last November during the bishops’ fall general meeting, Bishop Serratelli said that, with the time needed for publishers to produce the new edition of the missal and for Catholics to receive proper catechesis about the changes in the Mass, the use of the new missal is not expected before Advent of 2012.