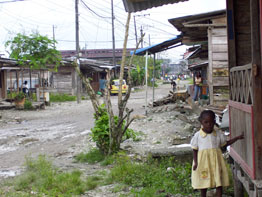 WASHINGTON – Representatives from the U.S. Conference of Catholic Bishops and Catholic Relief Services in a telephone press conference Sept. 23 called on the major parties’ presidential candidates to lay out their foreign policy strategies in relation to the world’s poor and overseas assistance.

The campaigns of Democratic Sen. Barack Obama and Republican Sen. John McCain have failed to adequately address the global food crisis, the increasing role of the U.S. Defense Department in humanitarian work, the refocusing of U.S. foreign assistance, and how the government should help the poor adapt to climate change, said Bill O’Keefe, senior director for the advocacy department of the Baltimore-based CRS.

The Obama and McCain campaigns also have failed to sufficiently articulate if their foreign policy programs would promote religious equality, strengthen international law, support a safe haven for foreign refugees, or actively pursue a comprehensive resolution between the Israelis and Palestinians, said Stephen Colecchi, director of the Office of International Justice and Peace for the USCCB.

“This topic is timely considering that this Friday night (Sept. 26) the candidates will be debating foreign policy,” Mr. O’Keefe said. “These are critical issues that are crying out for attention.”

Both campaigns are currently focused on the domestic economic crisis and the Bush administration’s proposed bailout of U.S. financial institutions, which could cost taxpayers $700 billion or more if it’s approved by Congress.

With approximately $38 billion currently being spent on foreign aid – which includes costs for foreign embassies and diplomatic missions – both men argued that money spent to address global poverty is a minimal expense in the federal budget compared to the proposed bailout of U.S. financial institutions.

“There is no doubt the next administration and Congress has tough financial problems they will have to deal with,” Mr. O’Keefe said. “But there is a missed opportunity by the candidates to demonstrate their own leadership (on these matters) and to prove to the voters they can think comprehensively and broadly about comprehensive issues. The person who can demonstrate they can do that is more likely to win the election.”

If the U.S. government would invest in a solution to poverty in foreign countries, those nations would become better trade partners, Mr. Colecchi said.

Nations with fewer poverty issues also tend to be more peaceful countries and more peace in the world would reduce “the amount that we have to spend on defense,” he said.

The USCCB and CRS representatives used the Sept. 23 press conference as a way of reaching out to the candidates to urge them to address these issues in their campaigns.

The USCCB also has submitted its November 2007 “Faithful Citizenship” statement – which address these and other moral issues – to both campaigns and has sought a meeting with each candidate to discuss the topics face to face, Mr. Colecchi said.

Mr. O’Keefe also urged Catholics to bring up these issues with the candidates at campaign events and write letters to the editors at a variety of publications as a way of gaining support for moral concerns.

Ultimately, Catholics have the power to vote for the candidate they believe has best addressed these moral issues of conscience, he said.

Mr. Colecchi said the U.S. Catholic bishops are calling for a new style of politics that focuses “more on the pursuit of the common good than on the demands of narrow special interests.”