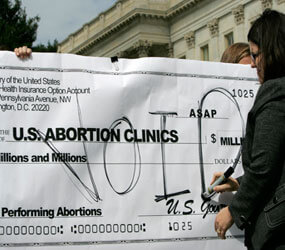 WASHINGTON – President Barack Obama’s pledge to continue the ban on the use of federal funds for abortion and to maintain conscience protections for health care workers in any health reform legislation was welcomed by two officials of the U.S. Conference of Catholic Bishops and the president of the Catholic Health Association.

Speaking with Catholic News Service Sept. 10, hours after Obama addressed a joint session of Congress and a nationwide television audience, Kathy Saile, director of domestic social development in the USCCB Department of Justice, Peace and Human Development, said the president’s address offered an encouraging sign that the administration has been listening to concerns raised by the bishops and pro-life organizations about abortion funding in any reform legislation.

Citing the bishops’ long-standing belief that all Americans must have access to quality, affordable health care, Saile said the president’s speech must be followed up with the appropriate changes in legislation currently pending in both houses of Congress.

As currently written, the leading piece of legislation in the House, America’s Affordable Health Choices Act of 2009, known as H.R. 3200, allows for federal funding of abortion. Language continues to be worked on in Senate reform measures.

Acknowledging that “serious significant details need to be ironed out,” Saile said that “we need to look at actual language that fixes provisions that are in existing bills.”

“We look forward to working with (Obama) to ensure that what is in the final bill, that there is no federal funding (of abortion), no mandates (to pay for abortion) and no requirement of people to pay for other people’s abortions,” Saile said.

“We believe that incorporating essential and long-standing federal laws on these issues into any new proposal will strengthen support for health care reform,” Doerflinger said, pledging to work with Congress and the White House to ensure that current legislation is amended.

Sister Carol Keehan, a Daughter of Charity who is president and CEO of the Catholic Health Association, told CNS that while much work remains on amending the legislation she was pleased by Obama’s stance.

“We were gratified to hear that federal funds would not be used for abortions and that conscience protections would be maintained,” she said. “We were pleased to hear him say we were going to move on now.

“There are too many people … who need this kind of (health care) assistance. We believe it is long overdue. It is a moral and economic imperative and we were pleased to hear him put it in those terms,” Sister Carol said.

Meanwhile, a group of pro-life legislators and organizations, led by Rep. Chris Smith, R-N.J., challenged the president’s position that health care reform legislation would not include abortion funding.

Calling Obama’s statements to Congress misleading, Smith said during a Sept. 10 Capitol Hill news conference that an analysis of H.R. 3200 shows that funding for abortion remains in place.

“Despite what Obama said, the House bill would allow abortions to be covered by a federal plan and by federally subsidized private (insurance) plans,” Smith said.

“President Obama must be held accountable for his words,” Smith added. “If he intends to support the pro-life amendments that have thus far been deleted by pro-abortion members of his party, we will welcome that. But the truth is that he seeks to cover up his intention to use the government-run public plan to send checks from the U.S. Treasury to abortionists around the country.”

Joining Smith was Rep. Joe Pitts, R-Pa., one of the authors of an amendment that would have ensured the federal ban on abortion funding would remain in place. The amendment was defeated in committee, however.

“Such an explicit exclusion is missing from this bill,” Pitts said, pledging to reintroduce his amendment when the bill comes up for debate in the House.

“This is not about the legality or the illegality of abortion. It is about keeping the government out of the business of promoting abortion as health care,” Pitts said.

Joining the press conference were representatives of the National Right to Life Committee, Democrats for Life, Students for Life of America, 40 Days for Life and the Susan B. Anthony List, which promotes pro-life women for elective office.

Part of a coalition called Stop the Abortion Mandate, the organizations pledged to undertake a massive lobbying effort of members of Congress to prevent the expansion of federal funding for abortion.

The 40 Days of Health Reform campaign, coordinated by the group Faith in Public Life, is conducting a nationwide call-in to Congress. Simultaneously, television ads urging people to call their members of Congress will be broadcast in key media markets in Arkansas, Colorado, Indiana, Louisiana, Missouri and North Dakota.

The group also plans a lobbying day in Congress Sept. 16.