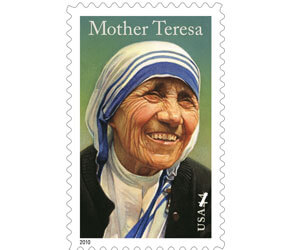 WASHINGTON – Blessed Mother Teresa of Calcutta will be among the subjects depicted on U.S. stamps debuting in 2010, the U.S. Postal Service announced Dec. 30.

The 44-cent stamp, bearing a portrait of Mother Teresa painted by artist Thomas Blackshear II of Colorado Springs, Colo., will go on sale on what would have been her 100th birthday, Aug. 26.

“Her humility and compassion, as well as her respect for the innate worth and dignity of humankind, inspired people of all ages and backgrounds to work on behalf of the world’s poorest populations,” said the Postal Service news release on its 2010 commemorative stamp program.

The release also noted that Mother Teresa received honorary U.S. citizenship in 1996 from the U.S. Congress and President Bill Clinton. Only five other people have been made honorary U.S. citizens – Winston Churchill, Raoul Wallenberg, William Penn and Hannah Callowhill Penn and the Marquis de Lafayette – and all but Hannah Callowhill Penn also have appeared on U.S. postage stamps.

Mother Teresa also received the Congressional Gold Medal in 1997 for her “outstanding and enduring contributions through humanitarian and charitable activities,” the release said.

Born Aug. 26, 1910, in what is now the Republic of Macedonia, Mother Teresa went to India at the age of 18 and founded the Missionaries of Charity there. She died in Calcutta Sept. 5, 1997, and was beatified by Pope John Paul II in 2003.

U.S. postage stamps in 2010 also will depict the Winter Olympic Games in Vancouver, the Chinese lunar new year, the Mackinac Bridge in Michigan, the Bixby Creek Bridge in California, the Negro Baseball League, and characters from the “Sunday funnies” – Archie, Beetle Bailey, Dennis the Menace, Garfield and Calvin and Hobbes.

In 2010, the Postal Service will issue the first stamp designed especially for oversized or odd-sized greeting cards. The 64-cent stamp will depict a monarch butterfly, and an illustration of a generic butterfly will appear on cards or envelopes requiring the additional postage.