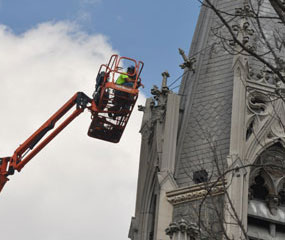 St. Patrick Church in Fells Point, the oldest parish in the Archdiocese of Baltimore, is closed indefinitely as a result of the Aug. 23 earthquake that shook the Mid-Atlantic Region.

The parish was founded in 1792. Its current church, which was built in 1898, was badly damaged by tremors that originated in the 5.9-magnitude earthquake that struck Mineral, Va. Several concrete parts of the steeple fell, one gouging the sidewalk at the northeast corner of Broadway and Bank Street.

According to the archdiocese, the steeple “will be selectively deconstructed and stabilized, a process that is expected to take several weeks. Once completed, the church will be reopened for use.”

St. Patrick recently became a mission of Sacred Heart of Jesus in Highlandtown, and held a Sunday Mass in Spanish before the earthquake.

The Archdiocese of Baltimore will run shuttle busses from the St. Patrick parking lot on Gough Street to Sacred Heart of Jesus for Sunday morning and Wednesday evening Masses in Spanish, departing at 8:15 a.m. and 7:15 p.m., respectively.

Return shuttle service to the church will also be offered.

Archbishop Edwin F. O’Brien visited St. Patrick the morning of Aug. 24, when Redemptorist Father Robert Wojtek, its administrator, met with archdiocesan officials and engineers, who had determined that the parish hall was also structurally unsafe, necessitating worship in Highlandtown.

“We thank the Lord that no one was injured,” Archbishop O’Brien said. “It will be a while before we reopen. We want to get back to business as usual as soon as we can, but everyone knows we want to play it safe.

“The cranes are coming in, and they’re going to be here for a couple of months.”

Broadway, the main thoroughfare between Johns Hopkins and the heart of Fells Point, remains closed between Bank and Gough Streets, forcing motorists to detour.

The archdiocese reported minor damage to two other churches, both in eastern Baltimore County, St. Mary Clement Hofbauer in Rosedale and Our Lady of Mount Carmel in Essex.

Nolan McCoy, director of facilities and real estate for the archdiocese, pointed out damage in the St. Patrick steeple to Archbishop O’Brien and Father Wojtek before a more thorough inspection was begun by crane operators and employees of Structural Preservation Systems LLC.

“Father Bob (Wojtek) will be the one dealing with this,” Archbishop O’Brien said. “It’s important that we reassure and give Father Bob every bit of help we can. There’s great history here. We’re conscious of that, and that it (St. Patrick) has a lot more years of service. We’ll not compromise it in any way.

“Whatever adjustments need to be made, we’ll accommodate. … There are great challenges that we face, and this is a reminder, that there is a higher power involved.”

McCoy said that, “by Oct. 1, we hope there is stability to the spire. We’ll know once we get up there.”

“We’re at the mercy of the engineers,” the archbishop added. “Nolan is going to go around the archdiocese and look at a few other structures. We have engineers at the cathedral (Cathedral of Mary Our Queen in Homeland), inspecting all the towers there.”

Pointing out damage to the archbishop, McCoy used a pigeon perched on the steeple for perspective.

“I’m afraid one of them is going to land on it and knock something off,” said Jim Bohn, project manager for Sructural Preservation Systems, LLC.

Father Wojtek leads a bilingual community that has already undergone substantial change to its worship routines.

“It’s been one thing after another, this is a tough, tough blow,” said Father Wojtek, who was showing a visitor the church at Sacred Heart of Jesus, where he is pastor, when the tremors reached Baltimore.

“The lights started to swing,” he said. “We were in the back of the church, and I thought a window had blown open in the choir loft. Two vigil candles fell, and one broke off. Then sirens started going off, and I knew it was something else.”

Charles Riggs, a resident of nearby E. Webb Court, said that he was passing in front of St. Patrick when the tremors reached East Baltimore.

“The ground lifted me up, and I ran north on Broadway,” he said. “I wanted to catch somebody, so they could see what I was seeing.”