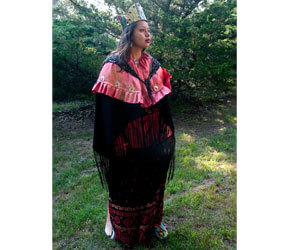 WASHINGTON – Devon Frazier, a sophomore at St. Gregory’s University in Shawnee, Okla., says she “felt completely honored” when she heard her name called for the “prestigious title” of Miss Indian Oklahoma 2011 at the Oklahoma Federation of Indian Women’s annual pageant in McAlester, Okla.

“My first reaction was to look at my mom – who made me stay up night after night to perfect and critique every little detail – and I knew I made her proud whether I had won or not,” Frazier said in a statement.

“We are very proud of Devon,” said Benedictine Father Nicholas Ast, St. Gregory’s vice president for mission and identity. “She is an exemplary young woman and represents St. Gregory’s University and the community well in all she does. We are pleased that she has this opportunity, and we support her fully.”

This past spring, Frazier was chosen for the title by a panel of judges based on her performance in several areas, including personal interview, essay, traditional dress, talent, platform and her answer to an impromptu question. The theme of the 2011 pageant was “Honoring Our Mother’s Journey by Keeping Our Eyes on the Future and Our Hearts in the Past.”

According to the pageant’s custom, Frazier was presented with a silver crown and cedar box. Her reign will last one year.

Unlike conventional pageants, the Miss Indian Oklahoma pageant, developed by the Oklahoma Federation of Indian Women in 1973, functions as a means of fostering and preserving Native American culture and is open only to young women who are registered with a particular tribe. Frazier is registered with the Absentee Shawnee Tribe, though she also has affiliations with the Choctaw, Delaware and Caddo tribes.

Native Americans represent 8.6 percent of the total population of Oklahoma, according to the U.S. Census Bureau of 2010.

For the talent portion of the pageant, Frazier chose to perform the song “You Raise Me Up” by Josh Groban and interpreted it in sign language. She said she felt it best captured the theme of the pageant. “I wanted to show that what my ancestors – my mother and grandmother and women before me – did for the future generations was really inspiring.”

She is studying history at St. Gregory’s, a Benedictine liberal arts university founded in 1875. It is the oldest university in Oklahoma. Frazier was an Oklahoma Academic Scholar and star softball athlete in high school. She received an athletic scholarship to attend the university, where she plays softball today.

She also is involved with several student initiatives on campus, including the Native American study group, and she hopes to start a Native American leadership student group in the near future.

In a June message to those involved in Native American ministry, Father Wayne Paysse, executive director of the Black and Indian Mission Office based in Washington, shared the news of Frazier’s win and said: “She is certainly a role model for our Native American youth across the United States.

During her yearlong reign as Miss Indian Oklahoma, Frazier will be visiting various groups, attending powwows, and speaking about the importance of preserving one’s culture, especially among youths. She told CNS the challenges facing young Native Americans often have to do with education.

According to the National Center for Education Statistics, the number of American Indian students enrolled in colleges and universities has more than doubled in the past 30 years. Nevertheless, the high school dropout rate among Native Americans remains the second highest in the nation, second only to Hispanics. Frazier said she recently spoke to members of the Kickapoo Tribe about the importance of education.

“They have low high school graduation rates, which is troubling to me because I believe strongly in education,” Frazier told CNS. “A lot of kids want to stay in their bubble, but sometimes you have to break that bubble to help where you came from.”

Though unsure of her plans after college, a news release from St. Gregory’s noted that she is considering becoming a teacher herself.

“I have thought about numerous possibilities, such as a teaching career or working with the Absentee Shawnee tribe,” she said. “Whatever I do, I know that I want to help other people, because that is something I greatly enjoy.”