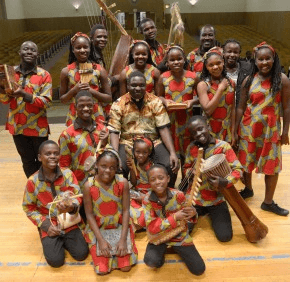 Father Francis Ouma
By Erik Zygmont
ezygmont@CatholicReview.org
TOWSON – Thanks to a chance meeting, Father Francis Ouma, originally from Uganda, received a unique opportunity to share his culture with Towson’s Immaculate Conception community.
“Right now, we are going to perform for our king, Jesus Christ,” declared members of the Ugandan Sozo Children’s Choir April 13 to the full auditorium at the Immaculate Conception School before launching into one of many songs incorporating vocals, dance and percussion instruments.
The group, which included close to 20 children from kindergarten age to late teens, visited the school to perform for students during the day, and again in the evening to perform for families.
Father Ouma, associate pastor at Church of the Immaculate Conception, learned of the children when he met Jerry Garland, a member of the Sozo Children board.

Get to know more about Father Francis Ouma here.

“I heard their story and I was really touched,” said Father Ouma, who was ordained for the Archdiocese of Baltimore last year.
The operations director and one of the founders of Sozo Children told the audience that the organization began on a mission trip. He and another founder came across an orphanage with deplorable conditions in Kampala, Uganda’s capital city.
“One day, we noticed red marks on one of the girls’ feet,” he said.
The children informed them that the marks were from rats that came and bit them during the night.
“We knew at that point that something had to change,” the operations director said.
The mission changed into a push to build a new orphanage, and Sozo Children was born. The new orphanage is family style, with house “moms” and “dads,” on 28 acres of land.
The operations director said that many Americans have inquired whether the 121 Sozo children are available for adoption. He said that they will stay in Uganda.
“Uganda is a really great place,” he said. “We just want to equip these children to be the future Christian leaders of their country.”
More information on Sozo Children is available at sozochildren.org.
The Sozo Children’s Choir arrived in the U.S. Dec. 27, 2015, and will depart in May. Sharon, a 15-year-old with the group, said that her favorite part of the trip was a visit to Disney World in Florida. She particularly enjoyed Space Mountain and Splash Mountain.
She liked Baltimore, too.
“I got to meet new people, and some of them became my friends,” she said. “I’ll miss them so much.”
Madeline Meaney, principal of Immaculate Conception School, said that her students were also thrilled to meet the Sozo children.
“We had no clue what to expect,” she said. “I think when the students saw (the Sozo children) walking in, they were kind of curious, but when they started singing, our students started clapping their hands.
The Sozo Children’s Choir performed two songs at a school Mass that day.
“They were beautiful,” Meaney said. “I complimented one of the gentlemen, and he said, ‘That’s nothing – wait until tonight.’”
The Sozo children got a special treat, too. Calling upon his network, Father Ouma organized a meal for them of home-cooked Ugandan food.
As they ate, Meaney said, “Father Francis was just sitting up there, beaming like a little kid.”
To see more photos from the performance, click here.
See also:
From Uganda to Baltimore: Deacon sees upcoming archdiocese priesthood as ‘missionary vocation’
Baltimore sixth-graders expand learning, leadership on banks of Chesapeake
PrevNext