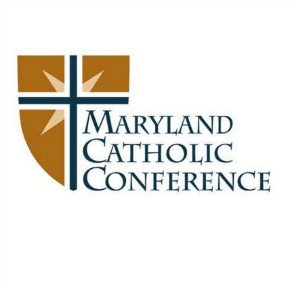 By Erik Zygmont
ezygmont@CatholicReview.org
The 2016 Legislative Session, which officially ended April 11, was quite fruitful, according to the Maryland Catholic Conference (MCC), the legislative lobbying arm of the Maryland bishops.
“This has been one of our most successful sessions in many years,” said Mary Ellen Russell, executive director of the MCC.
She lauded the passage of the BOOST (Broadening Options and Opportunity for Students and Teachers) Program as a victory for school choice. The program creates a $5 million scholarship program for students in need (those eligible for free and reduced-price meals) who wish to attend nonpublic schools. The program, which will be in effect for the 2016-2017 school year, will be administered by a seven-person board.
“We’re hoping it can be hugely successful,” said Garrett O’Day, associate director of education, children and families for the MCC. “It’s going to take the continued advocacy of our coalition and our schools.”
Russell noted that it took “10 years of advocacy” to pass such a bill, and thanked State Senator James “Ed” DeGrange and State Senate President Thomas “Mike” Miller for their continued support.
The Maryland Healthy Working Families Act, which would have required employers of 15 or more to allow their employees to earn paid sick leave, passed the House of Delegates but did not advance for a vote in the State Senate.
Russell called the House passage of the bill “historic,” but the fact that the bill did not advance was “our biggest disappointment,” she said.
She said that the bill apparently “fell victim to failed negotiations between the House and Senate” as part of a larger tax package.
The MCC also supported the Justice Reinvestment Act, an overhaul of the state’s criminal justice system, which, among other changes, eliminates mandatory minimum sentencing for non-violent drug offenses and emphasizes drug treatment.
The bill received bi-partisan support, including from Gov. Lawrence J. Hogan Jr.
Russell also praised the passage of close to $300 million in aid to Baltimore City – to demolish vacant buildings as well as help struggling communities.
She lauded the defeat of the Richard E. Israel and Roger “Pip” Moyer End-of-Life Option Act, which would have legalized physician-assisted suicide for terminally ill patients but was withdrawn from the Senate at the beginning of March. The bill is expected to return next year, and she reaffirmed the MCC’s commitment to fight it, in partnership with a coalition including doctors, mental health professionals and advocates for the disabled, the elderly and suicide prevention.
See also:
Maryland physician-assisted suicide bill withdrawn; opponents relieved, for now
Catholics converge on Annapolis; opposing assisted suicide big draw for some
PrevNext