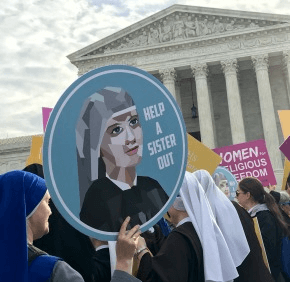 WASHINGTON – The U.S. Supreme Court May 16 sent the Zubick v. Burwell case, which challenges the Affordable Care Act’s contraceptive requirement for employers, back to the lower courts.
The justices’ unanimous decision, explained in a nine-page order, was based on the information that both sides submitted a week after oral arguments were heard in the case about how and if contraceptive insurance coverage could be obtained by employees through their insurance companies without directly involving religious employers who object to this coverage.
The court made clear that it is not expressing an opinion on the merits of the cases that are challenging aspects of the federal government’s health legislation and it also was not ruling on the issue of a potential violation of religious freedom.
Because of the “gravity of the dispute and the substantial clarification and refinement in the positions of the parties,” the court stated that religious employers and the government should be “afforded an opportunity to arrive at an approach going forward that accommodates petitioners’ religious exercise while at the same time ensuring that women covered by petitioners’ health plans receive full and equal health coverage, including contraceptive coverage.”
The court stressed that this approach is “more suitable” than addressing the refined positions submitted by both sides and added that “although there may still be areas of disagreement between the parties on issues of implementation, the importance of those areas of potential concern is uncertain, as is the necessity of this court’s involvement at this point to resolve them.”
“This is a game-changer,” said Mark Rienzi, lead attorney for the Becket Fund for Religious Liberty, which represents the Little Sisters of the Poor, one of the group’s challenging the federal contraceptive mandate.
He said the order reflects that the court has “accepted the government’s concession” that it can provide contraceptives to women “without using the Little Sisters.”
He also was pleased the court was forbidding the government “from fining the Little Sisters even though they are refusing to bow to the government’s will. It is only a matter of time before the lower courts make this victory permanent,” he said in a May 16 statement.
Washington Cardinal Donald W. Wuerl had a more nuanced look at the court’s order, saying he was pleased that it offered a path forward, but he also acknowledged that “this struggle will continue.”
The Washington Archdiocese is one of several plaintiffs in this case.
The cardinal said the archdiocese will continue its work to “serve others in education, health care, social services, and outreach to the poor and those most in need. We will continue to do that because we are resolute that it is precisely by being true to our Catholic identity in what we proclaim and in what we do that we can continue to help realize a truly good and just society.”
Father Frank Pavone, national director of Priests for Life, another of the plaintiffs, said the organization’s officials are “studying the implications of this development and are encouraged by it.”
He said the group, in response to the court’s request for more information, showed that there is “a way for the government to pursue its objectives without burdening our freedom of religion. We are ready to present these new arguments in the court of appeals.”
This is not the first time the court has sent a case back to the lower courts in light of new developments.
The opinion stressed that sending the case back to lower courts should not affect the government from making sure women covered by petitioners’ health plans obtain FDA-approved contraceptives, but it also means the government “may not impose taxes or penalties on petitioners for failure to provide the relevant notice” stating their objection to the coverage.
Oral arguments for Zubick v. Burwell were heard March 23 and the court asked for additional information March 29. The case involves the Little Sisters of the Poor, Priests for Life, the Pennsylvania dioceses of Pittsburgh and Erie, and the Archdiocese of Washington and other religious groups challenging the Affordable Care Act’s mandate that most religious and other employers must cover contraceptives, sterilization and abortifacients through employer-provided health insurance.
These groups, who do not fit the narrow exemption to the contraceptive mandate given to churches, argued that providing contraceptive coverage even indirectly through a third party, as the Obama administration allows through what it calls an accommodation, still violates their religious beliefs.

Little Sisters of the Poor on Supreme Court case: Why we can’t “just sign the form”