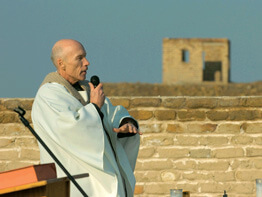 “We get a lot of care packages and that’s very good,” he said. But when soldiers receive letters of support, it makes a big impact. “Having that support will really enable us to do our job that we need to do better.”

Father Fehn, a priest of the St. Paul-Minneapolis Archdiocese, is serving in southern Iraq on an air base near the ancient city of Ur, the birthplace of Abraham. He is with the 1st Brigade Combat Team of the 34th Infantry Division. He expects to be stationed in Iraq until March.

As one of two Catholic priests on his base, Father Fehn works with other chaplains to ensure that soldiers and military personnel can attend worship services. He celebrates Mass and the sacraments and leads prayer and visits soldiers at 15 other camps and bases.

In an interview with The Catholic Spirit, the archdiocesan newspaper, at the end of December, the priest said his greatest challenge is to maintain a positive spirit and keep up the spiritual well-being of the soldiers.

He tries to achieve that by speaking frequently with the soldiers, especially at mealtimes when he walks around to different tables and keeps his eyes open for soldiers who might be by themselves.

“Trying to be available to the soldiers and listening to them is the best way I can find out what’s going on,” he said.

The chaplain noted that the soldiers’ biggest concern is the risk they take when they go out on convoy missions and have to focus on making sure they are doing the right thing at the right time with the right equipment.

He noted that along with military operations, the soldiers do a lot of positive things that do not get media coverage, such as working with different groups to establish schools and clinics and provide water treatment programs.

The priest has seen some soldiers deepen their faith and others question where God is in the midst of the fighting. He focuses on reminding them that God is always part of their lives, as difficult as that may be to grasp at times.

His own faith also has been challenged and he said he has learned to entrust his life to God.

“I’m here because there’s a reason for me to be here. I’ve let God figure out what that reason is, but I just continue to live each day as faithfully as I can, and be of help to the soldiers,” he said.

When the priest, a native of Minneapolis, is not on active duty he resides at Our Lady of Grace in Edina and serves as chaplain at two local hospitals. He chose to be a military chaplain nine years ago because he had often thought of joining the military and kept hearing commercials advertising the need for Catholic priests in the military.

The most rewarding part of his role is getting to know soldiers. “A lot of times the soldiers will trust the chaplain with conversations and information that they wouldn’t really share with someone else,” he said. “To have that trusting relationship with the soldiers has been my greatest joy.”

He said that his work in the Minnesota hospitals is not much different from his current role in Iraq because when he goes into a hospital room with a Catholic patient he never knows the patient’s personal faith experience.

“I go in there completely blind. I’m there to present the word and the presence of Christ’s love and Christ’s compassion, and that’s what I do here because I never know with the soldiers what their faith is, what kind of faith it is, what their practice is,” Father Fehn said.